The Vault of Shadows

The Vault of Shadows is a mystery as well as an achievement that requires the player to complete four puzzles. Each puzzle must be completed to solve the mystery and can be started from any wall location with the corresponding spell. The order of the puzzles is fixed and can be progressed through the remaining spell locations in any order. 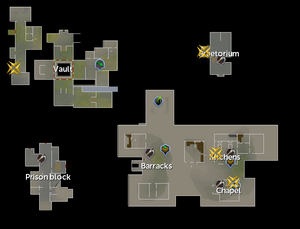 The locations of all four buttons.

Information gathered in previous Archaeology mysteries and research has alluded to the presence of a vault at the Kharid-et site hidden within the shadow realm, possibly several layers into the shadow realm. In order to access this vault, four buttons (found as 'inactive dials' before they are powered) located around the site must be activated with the use of spell scroll artefacts.

The buttons may be activated and pressed in any order - the order of the subsequent puzzles is fixed in sequence, even if the buttons are activated or solved in a different order to below. This guide lists the button activation in the order of Archaeology level requirement for each scroll artefact (when doing the full mystery) and assumes this ordering for the puzzle section.

The buttons are activated as follows: 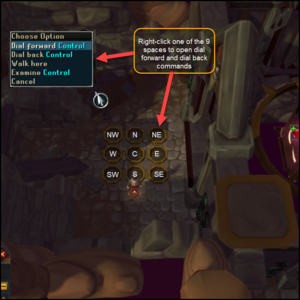 Head back to the Ice Button's location (or whichever button you activated first). Press the button and enter the vault.

Pick up the praetor's log page 1 from the floor. It will note that the code for the vault is the same sequence as with the prison door in the Prison Break mystery: shadow dials first (top row), then blood dials (second row), then smoke dials (third row), and finally ice dials (bottom row).

Follow the steps detailed below to adjust the dials in the correct configuration. Should you make an error, leaving and returning will reset the puzzle.

When you solve the puzzle, the door will open and you will find praetor's log page 2. Leave the vault from the button where you entered the vault. 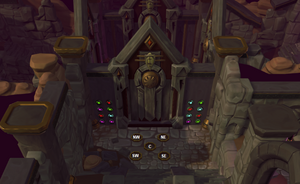 The second puzzle is a similar puzzle to the first, but this time the player has five buttons in an X formation instead of nine. The controls each rotate the dials in 2x2 square as before. Again the final order of dials from top to bottom is 'Shadow', 'Blood', 'Smoke', 'Ice'.

When you solve the puzzle, the door will open and praetor's log page 3 will appear in your backpack. Leave the vault from the button where you entered the vault.

Go to the area north of the chapel and cast the "smoke cloud" spell to the button on the west wall. 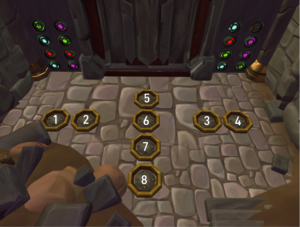 In this puzzle, the buttons are in a line horizontally (when facing the door). When moving columns of dials, the buttons in a vertical row will move. The solution is the same.

Should you make an error, leaving and returning will reset the puzzle. Changing worlds or going to lobby will put you back in the chapel. Using the boat will take you out by the river and put you on the bank of the river, opposite the dominion tower.

The sequence to open the door is as follows. See the image to the right for the button numbering used. Backward movements are denoted with a B after the number, eg. 5B is 5 dial back.

When you solve the puzzle, the door will open and praetor's log page 4 is placed in your backpack. Leave the vault from the button where you entered the vault. 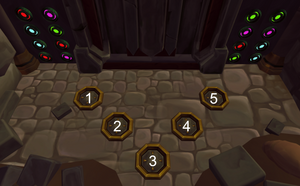 The solution for the puzzle is, once again, the same. There are five buttons corresponding with three different shapes of dials (each moving four dials at a time):

The puzzle may be solved with the actions as follows. See the image to the right for the button numbering used. 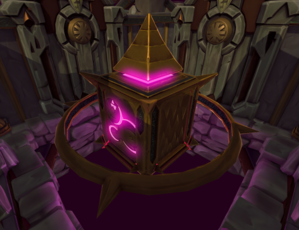 Floating crystal in the centre of the vault.