A dominarian device is a Saradominist artefact which is made by restoring the damaged variant at an archaeologist's workbench after the damaged variant is excavated from the Oikos fishing hut remnants excavation hotspot at the Everlight Dig Site with level 84 Archaeology.

One of these is also used to obtain the Andvaranaut relic from Reldo, which can be used on the mysterious monolith to unlock the Sticky Fingers relic power. 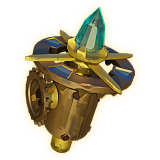 The Dominarian device in the journal.