From the RuneScape Wiki, the wiki for all things RuneScape
Jump to navigation Jump to search
This article is about the restored variant. For the damaged variant, see Hallowed lantern (damaged).
Item JSON: {"edible":"no","disassembly":"yes","stackable":"no","stacksinbank":"yes","death":"always","name":"Hallowed lantern","bankable":"yes","gemw":false,"equipable":"no","members":"yes","id":"49780","release_date":"30 March 2020","restriction":"surface","release_update_post":"Game Update: The New Skill Archaeology is here!","lendable":"no","destroy":"You will have to find another through Archaeology.","highalch":false,"weight":0.001,"lowalch":false,"tradeable":"no","examine":"A fully restored hallowed lantern.","noteable":"no"}

A hallowed lantern is a Saradominist artefact which is made by restoring the damaged variant at an archaeologist's workbench after the damaged variant is excavated from the Prodromoi remains excavation hotspot at the Everlight Dig Site with level 42 Archaeology.

Following its restoration, the hallowed lantern can be given to the Statue of Hebe along with 10 white marble in the south-eastern part of the Everlight Dig Site, east of the oikoi area.

Players can make a hallowed lantern (lit) by using an unlit lantern on Everlight on top of the lighthouse. Adding the lit lantern to the Statue of Hebe will award the player with 'The Epic of Hebe', which can be read for 50,000 Archaeology experience. 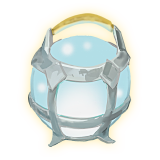 The hallowed lantern in the journal.

This information has been compiled as part of the update history project. Some updates may not be included - see here for how to help out!
Retrieved from ‘https://runescape.wiki/w/Hallowed_lantern?oldid=35729525’
Categories:
Hidden categories: