A Thorobshuun battle standard is a Bandosian artefact which is made by restoring the damaged variant at an archaeologist's workbench after the damaged variant is excavated from the Goblin dorm debris excavation hotspot at the Warforge Dig Site with level 83 Archaeology.

If the player enters the northern tunnel in the Warforge Dig Site with a Thorobshuun battle standard in their inventory, they will receive the red hand cave painting. 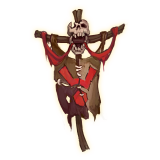 The Thorobshuun battle standard in the journal.

This information has been compiled as part of the update history project. Some updates may not be included - see here for how to help out!
Retrieved from ‘https://runescape.wiki/w/Thorobshuun_battle_standard?oldid=35729540’
Categories:
Hidden categories: