The artefact can be read near the dial in the room past the prison in Kharid-et Dig Site. This will trigger part of the mystery The Vault of Shadows. 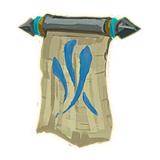 The 'Incite Fear' spell scroll in the journal.