From the RuneScape Wiki, the wiki for all things RuneScape
Jump to navigation Jump to search
This article is about the restored variant. For the damaged variant, see Legionary gladius (damaged).
Item JSON: {"edible":"no","disassembly":"yes","stackable":"no","stacksinbank":"yes","death":"always","name":"Legionary gladius","bankable":"yes","gemw":false,"equipable":"no","members":"no","id":"49882","release_date":"30 March 2020","restriction":"surface","release_update_post":"Game Update: The New Skill Archaeology is here!","lendable":"no","destroy":"You will have to find another through Archaeology.","highalch":false,"weight":0.001,"lowalch":false,"tradeable":"no","examine":"A fully restored legionary gladius.","noteable":"no"} 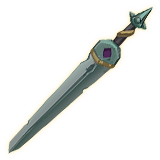 The legionary gladius in the journal.