The artefact can be read to cast a spell, which does not consume the scroll unless used to activate a dial to access The Vault of Shadows. 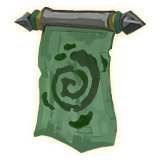 The 'Smoke Cloud' spell scroll in the journal.