From the RuneScape Wiki, the wiki for all things RuneScape
(Redirected from G.A.G.)
Jump to navigation Jump to search
The Old School RuneScape Wiki also has an article on: osrsw:Group of Advanced Gardeners
"GAG" redirects here. For jokes, see April Fools jokes. 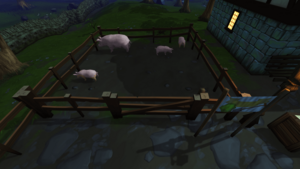 The Group of Advanced Gardeners have a pigpen with their logo on it in Draynor Village market. They play a role in the Fairy quest series, especially in the first quest A Fairy Tale I - Growing Pains.

This information has been compiled as part of the update history project. Some updates may not be included - see here for how to help out!
Retrieved from ‘https://runescape.wiki/w/Group_of_Advanced_Gardeners?oldid=35940915’
Categories:
Hidden category: