From the RuneScape Wiki, the wiki for all things RuneScape
Jump to navigation Jump to search
Goth leprechaunGoth leprechaun (medium farm requester)? (edit) 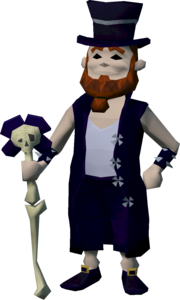 The goth leprechaun are a pair of NPCs at the farming patches in level 20 and level 38 Wilderness. They operate virtually the same as their green counterparts, the tool leprechauns and will store farming tools and other supplies such as plant cure and compost. He was the first leprechaun to have an updated chat head.

The goth leprechaun at the flower patch in level 20 Wilderness can teleport players to the Vinesweeper minigame.

A goth leprechaun can occasionally be found at Manor Farm, asking for help with a medium Farming Guild request.

This information has been compiled as part of the update history project. Some updates may not be included - see here for how to help out!
Retrieved from ‘https://runescape.wiki/w/Goth_leprechaun?oldid=35698239’
Categories:
Hidden categories: