The Falador Park is a large, fenced-in park found in Falador. Several gardeners maintain the plants and ponds located here. It is the entrance to the lair of the Giant Mole (which can only be killed by members), and is a key location in the members quest Wanted!, as well as the free-to-play quest Pirate's Treasure which requires the player to dig the ground at Falador Park. There is also a Treasure Trail clue scroll which leads here.

The park once was a popular location for drop parties and trading. Before the release of the Grand Exchange, Falador Park was the main trading area in World 2. Players often set prices here for items.

Falador Park has a tree farming patch for oak, willow, maple, yew, and magic trees. Like all patches, it includes a tool leprechaun, along with the hireable gardener, Heskel. Just east of the farming spot, the garden supplier can be found. She sells bagged plants, which can be planted in a Garden or Formal Garden in a player-owned house.

Directly under Falador lies a lair, which contains the fearsome level 230 Giant Mole. A player can enter the mole's dungeon by clicking on the giant plant found in the western part of the park. The Giant Mole always drops mole claws and mole skins. The player can trade the claws and skins with Wyson the gardener for birds' nests, (and for White Lily Seeds with the completion of the Hard Falador Tasks). 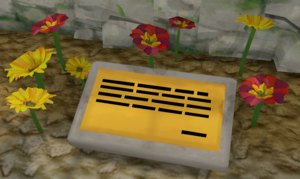 On 13 June 2016, heralding the end of the 10th anniversary event of the Falador Massacre, a memorial plaque was added to the park.

The 6 statues around the pond in Falador Park.

Before completion of While Guthix Sleeps, six broken memorials can be found around the pond. Even free players can see this. However, they are broken to the very base and are unrecognisable. It foreshadows the events of the quest.

After completion of While Guthix Sleeps, the pond is surrounded by the statues of the six fallen warriors; Sloane, Ghommal, Hazelmere, Cyrisus, Duradel, and Turael.

Even though Kuradal is now the seller of the slayer cape, Duradel's statue is seen wearing one, due to Duradel being the cape seller at the quests release.