From the RuneScape Wiki, the wiki for all things RuneScape
Jump to navigation Jump to search
The Old School RuneScape Wiki also has an article on: osrsw:Lletya

Lletya (pronounced *Ch*let-uh-ah)[1] is an elven village in Tirannwn that can be accessed shortly after starting Mourning's End Part I or after completing part of The Prisoner of Glouphrie. It is a settlement of rebel elves, led by Arianwyn, during the Elven Civil War, and continues to remain as a thriving settlement of elves after the end of the war. Before the release of Prifddinas, it was the only settlement with a bank in Tirannwn. It is a starting point for many who wander into the elven lands.

Lletya is Welsh for Lodge or Barrack. According to Reldo, in the Elvish tongue, Lletya is pronounced *Ch*let-uh-ah: this is likely transcribed [ˈɬɛtəa]. The *ch* "indicates a slight rolling of the sound at the base of the tongue, as if you were to attempt to clear your throat quietly and politely", according to Jagex.[1] A common mispronounciation is Let-ya.

The eight elven clans formerly lived together in peaceful cooperation in Prifddinas. Following the Siege of Prifddinas, which led to the fall of the city at the hands of the Iorwerth clan, the other seven clans lived in exile in the forest of Tirannwn, with five of their leaders gone into hiding. Lletya was founded there by Arianwyn, leader of the rebel elves, and by the late Lady Ithell, who built the city out of the wood from the trees of the surrounding area, as a settlement for the elves in exile. Lady Ithell died shortly afterwards, leaving behind construction plans for a statue that would later lead to the revelation of her successor. Arianwyn remained there, and continued his military and strategic planning in the settlement, with hopes for an eventual defeat of the Iorwerth elves and restoration of his beloved city of Prifddinas as a home for all elves.

As an adventurer is misled by King Lathas, who falsely claims that he and Lord Iorwerth are fighting against the Dark Lord when in fact they both are working together for him, into killing the king's enemy and brother King Tyras, he is spotted by Arianwyn, who realises that the adventurer has been tricked. Arianwyn travels to Ardougne, where he meets the adventurer and reveals the truth. The adventurer then agrees to switch sides, spying on behalf of the rebel elves to uncover the plans of Lord Iorwerth's elves and their allies. Some time after this, the adventurer is invited by Eluned in the forest of Isafdar to meet Arianwyn in Lletya to discuss strategic plans for the undercover investigation. Eluned tells the adventurer how to get to Lletya, explains how crystal teleport seeds work, and provides an already charged crystal teleport seed for easier transportation to Lletya. The adventurer would return several times to Lletya to discuss further strategic plans with Arianwyn, where the groundwork would be laid for the restoration of the weakened defences of the Temple of Light, the foiling of Lord Iorwerth's plans to summon the Dark Lord, the defeat of Lord Iorwerth, and the eventual restoration of Prifddinas. Lady Ithell's successor is revealed to be Kelyn, an elf from Lletya. Kelyn and Arianwyn, along with the rediscovered five elven clan leaders and Iestin Edern, an ally who takes the place of Lord Iorwerth, with the help of the adventurer, together regrow the city of Prifddinas from its reverted crystal seed form and sing the city into shape.

Following the successful restoration of Prifddinas, Kelyn moves there as the new Lady Ithell. She is replaced by Bronwyn, an elf from Lletya who is also of the Ithell clan. Arianwyn also moves to Prifddinas, accepting his rightful position as Lord Cadarn, but continues to maintain a presence in Lletya. Several other elves also choose to remain in Lletya even after Prifddinas is restored. 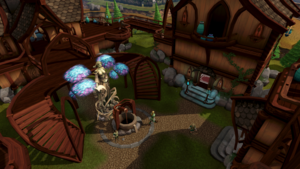 During Mourning's End Part I, Eluned will teleport you into the city for the first time and give you a crystal teleport seed with 4 charges that lets you teleport back to the city. She will also recharge it for a fee, though this amount goes down the more times you recharge the crystal with her, like with the crystal bow and crystal ward. Additional crystal teleport seeds can be obtained from killing the elves in the city, but they will only have three charges. 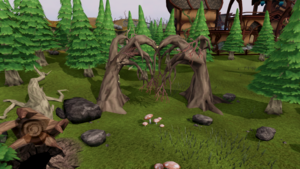 The trees to pass Lletya.

Assuming they have started the quest, players can also make their way to Lletya by sailing to Port Tyras, and passing through the forest until they reach the gates of Lletya. The same method can be attempted by way of the Underground Pass, and the Arandar Pass.

If a player chooses not to teleport into Lletya, there is an entrance from the forest of Isafdar, which is guarded by dire wolves. Trees surround the rest of the settlement, making it the only way out while walking or running.

Players who have completed The Prisoner of Glouphrie may take a safe path that begins near the Ourania Altar entrance, and takes them to the city itself. This path isn't really any shorter and due to the lack of maps of the area, may be more difficult than the other routes, but it can be used even if you have not yet begun the Mourning's End Part I quest. However, if you have not yet begun Mourning's End Part I, be careful who you talk to in the village. It is safe to talk to most of the elves, and to use the bank and shops, but if you speak to Arianwyn (and possibly some others), you will be transported out of the village because you don't belong there.

Players who have at least completed the easy Tirannwn achievements can use the Tirannwn quiver 1 and up to teleport to here. 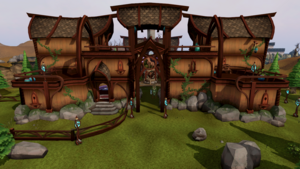 The elven settlement is filled with butterflies and lights. Players can learn more about the history of the settlement by reading the books in the bookshelves. Lletya is made completely of logs cut from the forest of Isafdar. In essence, Lletya is basically one building, with a square in the middle. Lletya has two floors; a ground floor[UK]1st floor[US] and an upper story. In addition, there is a ladder on the upper story to a watchtower.

There are elf warriors in the square. There is an altar in the upper area, which can help with killing them. In addition, Lletya is a convenient place to kill elves as others are found in very remote areas. Also, there are elves that can be stolen from with 85 Thieving. In the northern area of Lletya, there are four sheep that can be sheared in a pen. A notable quest NPC in the area is Arianwyn, who plays a part in Mourning's End Part I and II quests, and is the leader of the rebel elves. Another notable NPC there is Gwir, a quest recollector for the elf quest series. 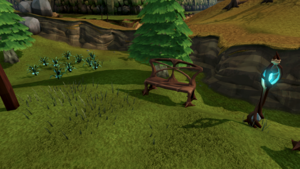 The flax field in Lletya, which is fairly close to the bank

Most of Lletya's attractions are on the ground floor[UK]1st floor[US]. Nearest to the entrance is a well, from which players may obtain water. There is a spinning wheel in the seamstress's shop. At the south-east corner of Lletya, there is a bank, and a flax field with a wall between them. North of the clothes is a pen with four sheep, which can be sheared. In addition, many of the NPCs in Lletya are found on the bottom floor, including Arianwyn. In the south-east corner, of the centre area, there is a fruit tree patch. The farming tools storage is handled by Teclyn. Amaethwr stands nearby, ready to watch your fruit tree, for a fee of course. In the room to the north of Arianwyn is Gwir. She is a scribe and will help you recall the events so far in the Elf quest series. During Plague's End the player builds the Ithell statue in the middle of Lletya which lets Kelyn realise she is the new Lady Ithell by looking at that statue.

There are a few stores on the ground floor[UK]1st floor[US] of Lletya that carry useful stock. As Lletya is in a remote region, they all tend to be well-stocked on variety.

The general store of Lletya is run by Eudav, and has the stock of a typical general store. Note that stocks are not infinite since the personalised shops update.

Oronwen, the seamstress, can repair Mourner trousers for 2 silk and a bear fur. Players must wait some time as she works on them; the waiting period is pretty short. North of the entrance, there is a spinning wheel and the seamstress' shop run by Oronwen. It is a useful place to obtain dyes, because all colours (except pink) are in stock there for six coins.

Lletya's archery shop is south of the entrance and is run by Dalldav. It is not recommended to buy arrows here as they are all almost twice their market value.

Gethin is found on the upper story of Lletya, and sells different kinds of food. 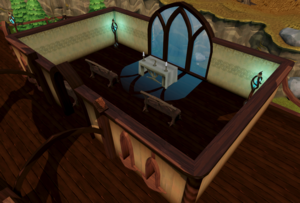 The altar on the upper floor

The upper area of Lletya is quieter, with fewer NPCs and things to do. If players are playing the game in high-quality, they will be able to see the city below, which makes an impressive sight. The upper floor of Lletya has a couple of functions.

One of them is the altar of Seren. Another is the two ranges, although they are not very useful due to their distance from the bank, and the inconvenience of repeatedly going up and down a ladder.

The watchtower can be accessed by climbing up the ladder in the archery shop or clothing store, then up the ladder that is found at the top. It allows players to see the landscape from the top of Lletya.

Players may leave Lletya by passing through the tree that function as a city gate, west of the area. Dire wolves are found just outside the gate. Continuing west past the trip wires leads to Tirannwn. Three magic trees and an elder tree can be found to the south of the city gate. Eluned and Islywn may also be found here: they will disappear and reappear at approximately five minute intervals.