From the RuneScape Wiki, the wiki for all things RuneScape
Jump to navigation Jump to search
The Old School RuneScape Wiki also has an article on: osrsw:Fairy Mafia
"Mafia" redirects here. For the penguin mafia, see Fettuccine Mafia. 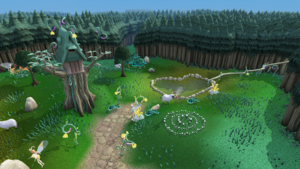 The beautiful landscape of Zanaris.

The Fairy mafia is an organisation of (male) fairies trying to take over Zanaris. Their leader is the Fairy Godfather. 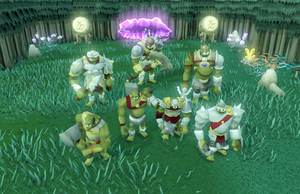 Martin the Master Gardener has problems with the crops not growing. This is because the Fairy Queen is very ill. She and the Fairy Godfather (whom the Queen thought to be good) were going to fight a dangerous Tanglefoot that resides in a Shady grove next to Zanaris. Before fighting, however, the evil Godfather attacked the Queen and made sure her magical secateurs were left behind in the Tanglefoot caves. He brought her back to Zanaris and said it was the Tanglefoot who dealt the heavy damage.

Afterwards, he temporarily became the leader of Zanaris. The Godfather summoned a rift leading to the Ork Realm, brining many orks to Zanaris. He and his bodyguards, Slim Louie and Fat Rocco, started to take over Zanaris. Martin the Master Gardener sent the player to investigate why his crops are dying, of which the Godfather makes use by letting the player dispatch the Tanglefoot and getting the Queen's secateurs for him, the only healing method for the Queen.

The player then discovers what they did and steals the secateurs back to heal the queen, who lies, along with some allies, in the Fairy Resistance Hideout. It, however, doesn't work. A Magic essence potion is being made, eventually reviving the queen. She immediately starts to prepare war against the Mafia along with her loyal general, the Tooth Fairy. 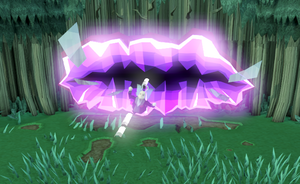 The last we see of the Fairy Godfather.

After using Fairy Tooth Magic to create allies to help defeat the Godfather, his orks and General Gromblod, Shredflesh and Bre'egth, a huge battle takes place at the orks rift, with all orks being killed and the Godfather sucked into the Ork Realm, after which the Ork's Rift explodes. Slim Louie and Fat Rocco aren't seen anymore, most likely meaning that the Fairy Mafia is defeated once and forever.