From the RuneScape Wiki, the wiki for all things RuneScape
Jump to navigation Jump to search
The Old School RuneScape Wiki also has an article on: osrsw:Fairy Godfather
Loading...
NormalIn combat 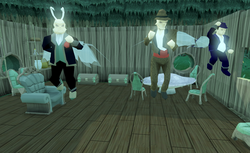 Fairy Godfather with his henchmen.

The Fairy Godfather is the ruler of Zanaris while the Fairy Queen is absent. He is also the leader of the Fairy Mafia, with two henchmen, Slim Louie and Fat Rocco. He is the main antagonist of the Fairy Tale quest series.

In A Fairy Tale I - Growing Pains, he appears as an ally, directing you to retrieve Queen's secateurs from Tanglefoot to cure the Fairy Queen. However, after the player gave them to him, it didn't work.

In A Fairy Tale II - Cure a Queen, he gave you permission to use fairy rings to search for the Fairy Queen. After the queen is properly cured, it was discovered that the Fairy Godfather betrayed her. He is trying to replace the fairies with orks and the Fairy Queen with himself.

At the beginning of A Fairy Tale III - Battle at Ork's Rift, he and his henchmen are absent from the throne room, but the Tooth Fairy warns he is growing in power and must be stopped. He is fought at the end, but he has a very low attack speed thus attacking the player rarely. His plans are foiled with the use of tooth magic. He is last seen being sucked into the rift he created into the ork realm, cursing Zanaris and the tooth creatures, transforming them into ivory orks and leaving a huge impact crater at the site of the rift. 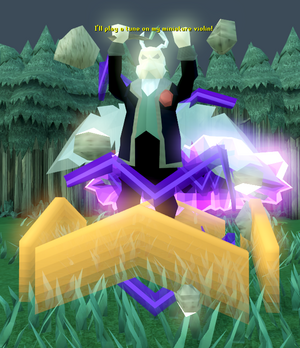 The Godfather healing his orks