From the RuneScape Wiki, the wiki for all things RuneScape
< Fur 'n Seek
Jump to navigation Jump to search
For the achievement, see Skeletal Wishes.

Fur 'n Seek wish list is a lore activity that unlocks the skeletal horror after finding a lot of special bones for the Odd Old Man. 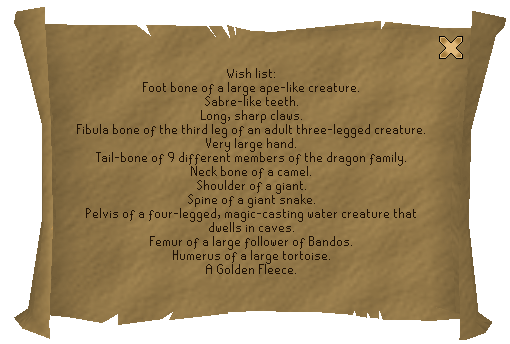 The wish list is a lore activity that is given by the Odd Old Man. The Skeletal horror fight at the end unlocks the music track Exhibit 'A', which like all other music tracks is required for the completionist cape.

Items: 875 coins (0 with Hard Karamja achievements completed), Dragonfire shield, Anti-dragon shield or a Super antifire.
Travel method: Use the Karamja lodestone.
Tactics: Once in the dungeon, you can kill the moss giants which are located near the front of the dungeons, or the Fire giants on the upper level. Once you venture further in, you can kill red dragons. You should then go deeper into the dungeon and kill the three metal dragons located here.

Items: Slayer Dart or Leaf-bladed spear or Leaf-bladed sword (optional: Off-hand leaf-bladed sword or a shield) or Broad arrows (with a shortbow or shieldbow) or broad-tipped/royal bolts (with a crossbow(s)), magical resistant armour, decent food, 1000 coins.
Travel method: Run from the Fremennik Province lodestone, or use the Enchanted lyre. Players can get to the caves via fairy ring code AJR, or to the Rellekka Hunter area from code DKS. The Slayer ring teleport to the Rellekka slayer caves also can be used very effectively. A Mask of the Aquanites can teleport directly to the aquanite chamber.
Tactics: Before entering the caves, ensure that you buy the golden fleece from Lalli for 1000 coins. Lalli is located near the golden apple tree. Upon venturing into the caves, it is recommended to bring ranged equipment to kill the turoth and the aquanite. You can obtain the teeth from the Hunter area by catching either a sabre-toothed kebbit with a deadfall trap or a sabre-toothed kyatt with a pitfall trap. Alternatively, you can visit Waterbirth Island and kill the Wallasalkis there for the teeth.

Items: If fighting a Cave horror instead of Monkey Guard: Witchwood icon, Light source, decent food and armour.
Travel methods: Players can get there via the fairy ring DIP (you need to repair two bridges) or empty ectophial and walk west from Port Phasmatys. The Ring of slaying teleports directly to the Slayer Tower, and the Canifis lodestone is also close by.
Tactics: Once you are on Mos Le'Harmless, walk out of the main town and head south-east until you reach the caves and kill a cave horror. If you don't need to fight the cave horror (because you plan to fight a Monkey Guard), then you can skip this step and proceed to the slayer tower and kill the crawling hands, which are extremely easy to kill.

Items: Dragonfire shield, Anti-dragon shield, (super) antifire potions, decent food and armour.
Travel method: Run south from Taverley lodestone, or west from Falador.
Tactics: If you have not obtained the shoulder bone yet, you can kill hill giants in the southern area of the dungeon, just before the Black Knight headquarters. Blue dragons can be found in the area behind the gate requiring the dusty key, as well as in the adjoining resource dungeon (requires 60 Dungeoneering). Black dragons can be found in the north-west area of the dungeon, past the Monks of Zamorak. Be sure to bring dragonfire protection when fighting the dragons for their bones.

Items: Dragonfire shield, Anti-dragon shield, decent food and armour.
Travel method: Run north from Varrock or northeast from Edgeville. Teleport to Daemonheim and run southwest into the Wilderness. Once in the Wilderness, run north.
Tactics: The Wilderness should only be used if there is no other alternative available. Decent armour and food are vital to survive from player killers. Dragonfire protection is also essential. Kill the hill giants (if you need to) nearby in level 20 wilderness. Then walk slightly north-east and kill the green dragons located nearby. You can then walk north and head to Red dragon isle if you need to kill a red dragon. It is strongly recommended to fight red dragons at Brimhaven Dungeon. Green dragons can be replaced with Brutal green dragons in the trip to the Ancient Cavern to kill the Mithril dragon.

Items: Dragonfire protection (super antifire potions, or a dragonfire shield/anti-dragon shield with antifire potions), decent food and armour, a strong weapon, prayer potions, combat-boosting potions (depending on your method for killing mithril dragons), teleport for emergencies.
Travel method: Teleport to the Barbarian Outpost using a games necklace and jump into the whirlpool. Alternatively, teleport to Kuradal with a ferocious ring, or use fairy ring code BJQ (requires restoring the ring with 5 bittercap mushrooms in order to unlock).
Tactics: Teleport to the Barbarian Outpost and run south to the whirlpool, and jump into it to enter the Ancient Cavern. Drink any potions you need and descend the steps into the main area. If you have not killed a green dragon during the Wilderness section (which is not recommended), kill the brutal green dragons until you obtain the green dragon tail-bone, and then ascend the steps to the south of the way you entered and kill a mithril dragon. It is recommended to use magic for the mithril dragons, which are weak to earth spells and have fairly high defence. 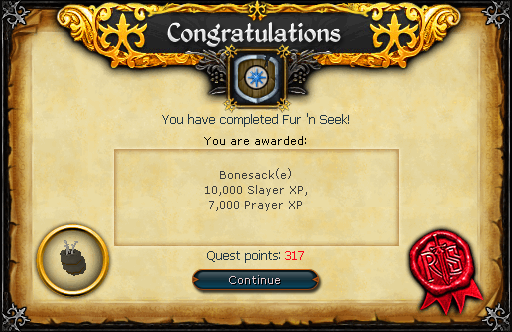 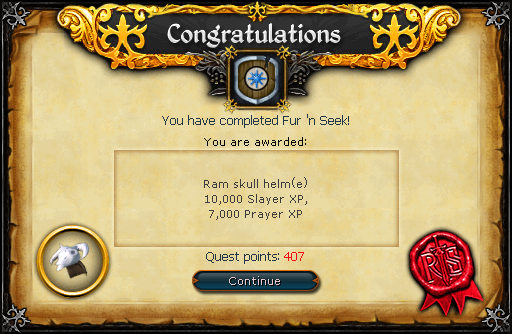