From the RuneScape Wiki, the wiki for all things RuneScape
Jump to: navigation, search
The Old School RuneScape Wiki also has an article on: osrsw:Killerwatt plane 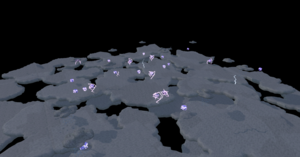 The Killerwatt plane is an area where Killerwatts are found. It is accessed by Professor Oddenstein's portal machine, found atop Draynor Manor. You must have completed Ernest the Chicken to gain access to this area.

The plane hosts some Killerwatts, and some small storm clouds, like the ones found in Zanaris, are also seen here. Players can exit via the portal going back to Oddenstein's room or by simply teleporting out.

During the Enlightened Journey quest, it was revealed by the balloon travelling screen that killerwatts inhabit clouds. However, players cannot engage them in battle there.

Players cannot use the dwarf multicannon in the Killerwatt plane.

Users with photosensitive epilepsy should turn off Flickering Effects in the Graphics Option menu before entering the portal.