From the RuneScape Wiki, the wiki for all things RuneScape
Jump to: navigation, search
Not to be confused with Isolde.
Loading...
StandardArmoured

Isold was a citizen of Burthorpe who wanted revenge on the trolls for killing his wife. Players could help him by giving him a bronze helm and leather gloves. A bronze full helm would not work. Both items were required before they could be given to him.

Players could kill the cows in the pen south of Isold for a cowhide, go to Jack Oval immediately south-west of him to tan the hide into soft leather for free. Then, take a free sample of needle and thread from Jack, use the needle on the soft leather and choose to make leather gloves.

A cave to the west of Isold has a few copper and tin rocks. A bronze pickaxe could be taken as a free sample from Tobias Bronzearms right outside the cave entrance. Mine one of each, then use it on the furnace next to Isold to make a bronze bar. Use the bar on a nearby anvil and choose to make a bronze helm. If you are not a trial member and are doing the non member version you will not be able to complete it.

Before the update on 17 February 2014, he was seen fighting training dummies. He also appeared in the crowd when the player is knighted by Major Mary Rancour at the end of the Troll Warzone Tutorial. 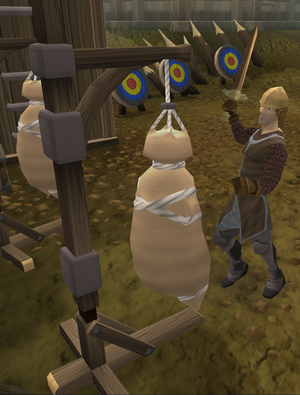 This information has been compiled as part of the update history project. Some updates may not be included - see here for how to help out!
Retrieved from ‘https://runescape.wiki/w/Isold?oldid=35582587’
Categories:
Hidden categories: