From the RuneScape Wiki, the wiki for all things RuneScape
Jump to navigation Jump to search
Corporal KeymansCpl. Shaun Keymans? (edit)

Corporal Shaun Keymans is a soldier of the Burthorpe Imperial Guard who can be found in the Burthorpe training camp to the east of Burthorpe Castle, north-east of the Burthorpe lodestone. After completing the Challenge System tutorial, players can receive a baby troll pet by speaking to him, which is seen being held by him before being claimed for the first time. He claims to have found the troll in a pile of manure, and it refers to him as "Shankymans", to his chagrin. If lost, the troll can be reclaimed from him at no cost.

He previously assisted players in fighting against the trolls during the opening section of the removed Troll Warzone tutorial.

The conversation with the troll 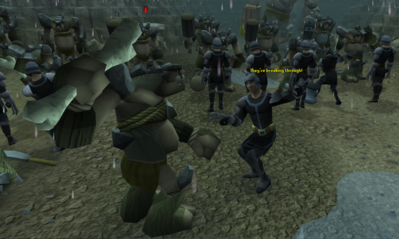 Shaun fighting against a Troll

This information has been compiled as part of the update history project. Some updates may not be included - see here for how to help out!
Retrieved from ‘https://runescape.wiki/w/Corporal_Keymans?oldid=35697663’
Categories:
Hidden categories: