This week sees the conversion of Burthorpe and Taverley into the Troll Warzone – a massive area rework designed to drop new members right into the thick of things. There’s plenty to do even if you’re one of the old guard, though, so high-tail it to Burthorpe and do your bit to turn back the trollish tide!

The Troll Warzone is designed as a linear experience, so new members and low-levelled players will be taken straight to Burthorpe and placed into a tutorial mode, where they’ll be guided through the content in order. The more experienced among you will be given the choice to be teleported straight to Burthorpe to follow this preset path, or you can make your own way there and complete the content in whatever order you wish.

There’s plenty to do, whether you’re new to the game or a hardened veteran:

Rolo the Stout is an unscrupulous merchant who is taking advantage of the plight of Taverley’s inhabitants to turn a quick profit, and whose one weakness is a finely crafted short crust. Grit your teeth, hold your nose and belay your culinary sensibilities to wreak vengeance upon this rotund racketeer’s digestive system.

To start Let Them Eat Pie, speak to Nails Newton outside the Pick and Lute tavern in Taverley.

Wolf Whistle, Druidic Ritual and Death Plateau have each been extensively re-written, to bring them in line with the quality and storyline of the rest of the area. If you’ve completed these quests before, you’ll still be able to play the new versions and will receive the rewards at the end, although you won’t receive any additional quest points. Wolf Whistle and Druidic Ritual are no longer requirements for training Summoning and Herblore, and Death Plateau is no longer a requirement for smithing claws.

War has victims on both sides, and one battle will introduce you to this little fellow. Visit the combat training area afterwards to adopt him, and he’ll stay with you indefinitely. Trolls are naturally long-lived, so you won’t see him grow up, and although you don’t need to give him food, he is always hungry. This is one troll that we would definitely recommend feeding...

Gielinor’s a big place, and it can often be hard to decide what to do or where to explore next. Speaking to the skill tutors in the warzone will allow you to undertake recommended tasks, which give great training ideas to those of low to mid skill levels. You’ll even get a handy teleport to the necessary area, although there are limits on how often you can use it. 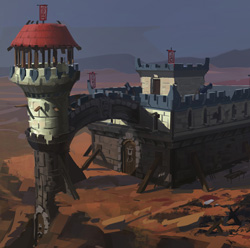 The Troll Warzone is also the latest of our graphical improvements. As well as being rearranged, the two towns are now a bustling, chaotic frontline base, with wounded soldiers, beleaguered refugees and war-worn architecture, while retaining and enhancing the Imperialist and druidic style of their more peaceful incarnations. There’s some amazing new audio content too, with sampled atmospheric sounds, music and effects that change naturally as you tour the area.

Along with all of this, there’s a pile of new stuff to help new members during their whistle-stop tour through their members’ benefits: a new two handed sword with a special attack; a customisable mage staff; a reworked version of the Dwarven Army Axe, which can be upgraded to give XP boosts helpful for speeding up low-level training; and the eternal gratitude of the Imperial Guard.

There’s never been a better time to be a member. If you’re considering making the switch to the members’ game, or have friends who’ve yet to give it a go, what’re you waiting for?

The Burthorpe Imperial Guard needs you!

Some quest starting zones, including Witch’s House and Grim Tales, have been moved to fit in with the rework of Burthorpe and Taverley. Some other frequently used features, such as the farming patch, have been moved too. Don’t worry, though – nothing’s been taken away!

- Melee armour up to steel (including square shields and kite shields), leather armour, and both blue and black wizard’s robes have been given a graphical overhaul.

- The blue skirt has been renamed to the wizard’s robe skirt, and the black skirt to the black robe skirt. Both now have small bonuses to magic attack and magic defence.

- For a look at the visual improvements we'll be making to higher-level armour, pay a visit to the mercenaries just north of Falador.

- There is now the option to travel to Burthorpe through your home teleport spell.

- We’ve made some visual improvements to the quest journal and task interfaces.

- Slayer monster respawn rates have been increased slightly to be closer to the respawn rate prior to Bot Nuke Day.

- All bank booths are now usable with a left-click "Bank" option.

- Clan Theatre emotes have been removed from the emotes interface when not in a Clan Theatre.

- The "Desperado" player title is now available from the Player Loyalty Store for a discounted price of 7500 loyalty points for a limited time of 2 weeks only.