From the RuneScape Wiki, the wiki for all things RuneScape
Jump to navigation Jump to search
The Old School RuneScape Wiki also has an article on: osrsw:Burthorpe Castle 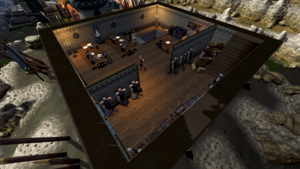 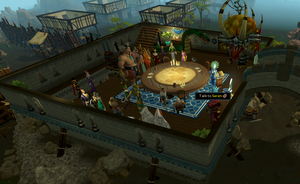 Burthorpe Castle, also called Burthorpe Citadel, is the official residence of Crown Prince Anlaf, son of King Vallance and heir to the Kingdom of Asgarnia. The castle is in the north-central part of Burthorpe and its lower levels contain the Burthorpe Games Room.

Previously, the castle's main use to many players was as gateway to Burthorpe, since the Games necklace teleported to the Games Room. However, with the addition of the Troll Invasion distraction, the teleport was moved out of the castle. It also played a role in the Death Plateau quest, before the area was updated.

Infrequently, a Treasure Trails clue will require the player to meet Uri in the Games Room.

Layout of the castle[edit | edit source]

The ground floor[UK]1st floor[US] has a north-west stair leading down to the Burthorpe Games Room, and north-east stone staircase leading to the 1st floor[UK]2nd floor[US]. There is also a ladder on the south-west outside of the castle which leads directly to the roof. Eadburg and a Servant can be found on this floor, as well as a guard who mentions the old Stone ball locking mechanism that the castle used to have.

The 1st floor[UK]2nd floor[US] contains the sleeping quarters for the Burthorpe guards. Eohric, the head servant, can be found on this floor. Eohric will offer the player a quest if asked, but it turns out to be cleaning the castle's cesspit, which the player automatically refuses.

At the beginning of the Desperate Times quest, Seren and the Council of Burthorpe meet here.

The roof contains five Archers who can be spoken to. The equipment room can be found at the centre of the roof, containing two safes. On the west side, there is a small bridge leading to a tower, but the door cannot be opened and trying to do so gives the message: "The door is securely locked to stop the trolls getting in. Don't you know there's a war on?" There is a small ladder on the south side which can be climbed down to reach the ground floor[UK]1st floor[US] and a south-east wooden steps to the 1st floor[UK]2nd floor[US].

The Burthorpe Games Room is located in the castle's basement.