From the RuneScape Wiki, the wiki for all things RuneScape
Jump to navigation Jump to search
"WW" redirects here. For the Distractions and Diversions activity, see Wilderness Warbands.
For other uses, see Wolf Whistle (disambiguation).

Wolf Whistle is a free-to-play quest that introduces the skill of Summoning, although it is not required to begin training the skill. The player helps druids in Taverley summon a one-of-a-kind creature to help defeat the trolls who have kidnapped one of their kin.

To start, talk to Pikkupstix who is just north of Taverley's east entrance. Ask if he has any quests and he will tell the player to look into the whereabouts of his assistants Scalectrix and Bowloftrix. He will say that they were by the dry well in Taverley and are very late getting back, making him worried. Agree to go and take a look for him.

Teleport to Taverley lodestone, head south and there will be a well. Talk to Scalectrix just outside of the well. She will mention that Bowloftrix was captured by Trolls and taken into the well and that she has been waiting for someone to help. She will say that there are too many trolls and they need to be broken up. She has already tried a Spirit wolf but the trolls just laughed at it. She will then ask the player to report what happened to Pikkupstix. The player can either take a look at the trolls and view a cutscene of Bowloftrix in trouble or talk to Pikkupstix. Either way, Pikkupstix must be talked to.

Tell Pikkupstix that Bowloftrix was kidnapped by trolls. Once he is told a spirit wolf won't work, he asks the player to assist him in summoning a Giant wolpertinger. He says that the wolpertinger can emanate an aura of fear that even trolls will flee from. He will inform the player that he needs his ancient wolf bone amulet, some white hare meat, and an embroidered pouch.

To get the pouch, just head upstairs in Pikkupstix's house and search the cluttered drawers in the north-west corner of the room.

Getting the white hare meat

Go to the pet shop south of Pikkupstix and ask the owner about white hare meat. He will inform the player that he does indeed have some White hare meat from his supplier in Morytania and will give some to the player. 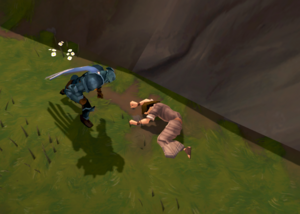 Pikkupstix gave the amulet to his assistant, Stikklebrix, for luck while traversing White Wolf Mountain.

To get the amulet, follow the road back across the bridge. Go west past the well and up onto White Wolf Mountain. Follow the middle path on White Wolf Mountain until Stikklebrix's body is found on the ground. Search his body to obtain the ancient wolf bone amulet. 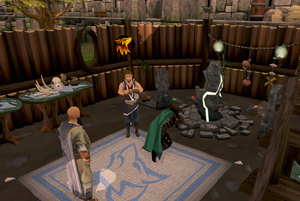 Pikkupstix will provide you the rare summoning items that are the remaining ingredients needed to make a giant wolpertinger pouch at the Obelisk in the hut.

Talk to him again and inform him all the items are on hand. He will ensure that any of the items that get lost or damaged are returned to him. Click on the obelisk located in the east side of his house and talk to him again. The player will combine the items into a giant wolpertinger pouch. Talk to Pikkupstix once again after infusing the pouch; he will inform you that it will take the combined power of the player and Scalectrix to summon the Giant Wolpertinger. He will send you back to Scalectrix at the well.

Head back over to the well and talk to Scalectrix. There will be a cutscene where the player and Scalectrix summon the Giant wolpertinger which scares the trolls, led by Wolf Meat and Wolf Bones, then fades away. Scalectrix and the player then free Bowloftrix from the trolls and after some dialogue, the quest will be completed. 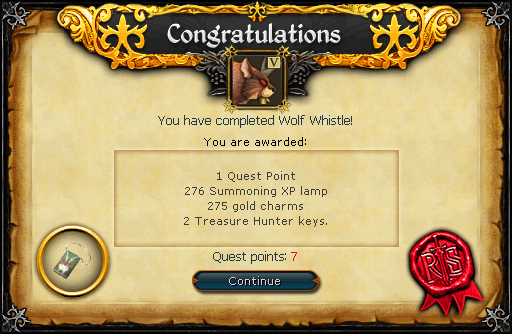 Wolf Whistle is not currently required for any quests or miniquests.