Druidic Ritual is a free-to-play quest that introduces the skill of Herblore. The player must aid the druids in gathering supplies for a ritual in exchange for knowledge in Herblore.

To start the quest, talk to Kaqemeex, who is located in Ewean's Grove in Taverley. He says that they need help dealing with the trolls, but Guthix doesn't seem to think that the chaos is significant enough to do anything about. To attract the attention of Guthix, he needs help to make an ointment of imbalance. Offer to help him with his task and he will tell the player to talk to Sanfew.

Sanfew can be located in the house south-west of Pikkupstix, directly north of Jatix's Herblore Shop. Talk to him about making an ointment of imbalance for Kaqemeex, and he will ask you to get the materials for him: untainted living water, wandering wyrmwood, and some stone fish scales. He will give you a vial if you do not have one. 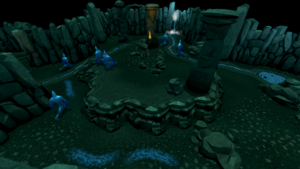 Items needed: Vial (given by Sanfew if none are in your inventory)

The untainted living water must be obtained from a cave to the north inhabited by gelatinous abominations. To get to the cave, head north from Sanfew until you reach a small cave entrance (just along the treeline, south of the stone circle). Enter the cave and go as far south as possible. Find the subterranean spring at the far end of the cave and take the water from there.

Now head back south until you reach Sanfew's house again, and then go south-west until you reach the western shore of Taverley's larger lake. Fish at the Sparkling Fishing Spot just east of the wheat field to catch a stone fish using a coin. Once you have caught a stone fish, use a chisel on it to receive some stone scales.

After obtaining the stone scales, look for the wyrmwoods in the same area north of Nora T. Hagg's house and next to Sylas. The wyrmwood will be in the ground, looking like a plant. Wait until it starts to walk around and then quickly pick it to get wandering wyrmwood. This may take a few tries, as they tend to delve themselves back in quickly. 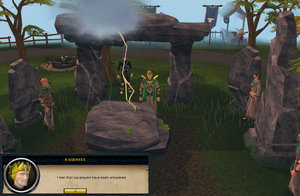 The power of Guthix is summoned!

Once the ingredients are all acquired, return to Sanfew and give them to him. He will use the ingredients to make an ointment of imbalance, and, in a cut scene, Kaqemeex will commence the ritual.

After some unnecessary "mad babbling", which Sanfew disapproves of, Kaqemeex will pour the potion over the altar. A cloud with lightning and sunshine will momentarily appear, and the circle will start growing flowers and ivy on the dead stones, indicating that the ritual is complete. The druids will conclude that Guthix has answered their request and will intervene against the trolls. 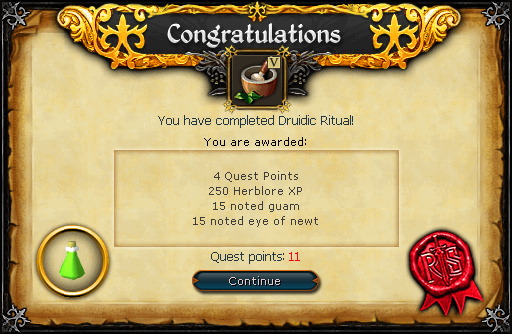 Druidic Ritual is directly required for the following quests/miniquests: