Heist is here - a multiplayer minigame where robbers must make away with loot, while guards do their best to consign them to the slammer.

Don disguises to get your hands on the swag, or follow your hunches to unmask sneaky crooks. Make your escape or pursuit across procedurally generated environments themed after iconic RuneScape locations.

Rewards include a range of perks, helping you lay down the law or pull off more daring capers, as well as bonus XP in Hunter and Thieving.

Read on for more information, or log in and head north of Falador to jump straight in! 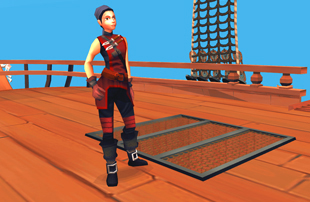 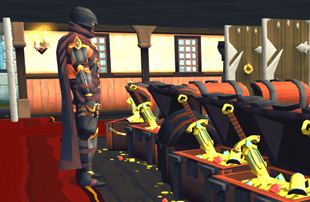 Once you're in the lobby area, head north to queue as a guard and south to queue as robber. Here, you can chat to Sir Vyvin or Liara - the leaders of the two sides - to get more information, browse rewards or try out the tutorial. The game will begin when there are 2-5 players on each side.

Before the game starts, players will be able to vote on which map theme they'd prefer - including the Canifis option selected in our recent poll!

Heist takes place on maps populated by crowds of NPCs. The aim of the game for the robbers is to steal bags of loot from the bank and return it to their start point, while the guards' objective is to stop them.

Robbers can click on any NPC on the map to adopt their appearance as a disguise. Use this ability to blend into the crowd, creep closer to the bank and make away with the loot!

To counter this, guards have the ability to accuse anyone on the map whom they believe to be a robber. To do this, simply click on your suspect.

If the guard's accusation is correct, the robber will lose their disguise and most of their run energy. Then, the chase is on - guards have a brief opportunity to catch the revealed robber and handcuff them, which - if successful - will leave them incapacitated for a time.

If the accusation is false, though, the citizen won't be happy. Too many mistakes will get a guard thrown in jail by Internal Affairs to cool off for a while.

If a robber is handcuffed twice, they'll be locked up in jail. Unless they can escape within one minute, they'll be turned into a guard and set against their former cohorts for the rest of the game.

The game ends when one of the following conditions is met:

Note that if a robber logs out or otherwise leaves the game, the total loot required to win is not reduced.

Tricks of the Trade

Heist is simple to play, but it requires skill, cunning and a keen eye. The best robbers will be able to mimic citizens to fool the guards, while the most successful guards will be the ones who can spot suspicious behaviour a mile off.

Teamwork's also important. Sharing information and working with your teammates to accomplish your goals is a path to success. Robbers can also pickpocket guards for jail keys, which they can use to spring their teammates from jail, or to free themselves.

Each map is uniquely laid out, and much of the scenery can be used. Hide in hay carts (or give them a good poke!) and clamber up the side of buildings for amazing rooftop chases. Depending on the theme of the map, there may be special features, too.

The citizens will sometimes need assistance. If you see someone asking for help, you can fulfil their request for a reward - a bag of loot for a robber, or eyewitness information for a guard.

These are just the basics - every game of Heist is different, and the best way to learn it is to try it out. Gather some friends, pick a side and start devising your own strategies!

Most of the rewards on offer are helpful perks that'll improve your performance in Heist. Each of these is specific to one of the two sides.

For example, for playing as a guard, you can unlock the ability to deploy security sensors, or earn access to a Wanted board that shows you the current disguises of players on the robbers' team. Robbers' perks include the ability to throw smoke bombs, or to smuggle a shovel into jail to make your escape!

Reward points can also be spent on hearty helpings of bonus XP in Hunter or Thieving.

We hope you enjoy Heist as we do. It's already a huge hit here in the office and - most importantly - it creates great stories. Be sure to get on the forums and tell us all about your daring escapes, your eagle-eyed police work, and - of course - your most spectacular failures!

Have fun, and be sure to give us your feedback.

How to start Heist: