Burthorpe is a town north-west of Falador and north of Taverley, and is currently the base of the Imperial Guard of Asgarnia as well as the residence of Prince Anlaf. The town is members-only.

Burthorpe is one of two areas of Asgarnia that is not controlled by the White knights. (The other is the Black Knights' Fortress, held by the white knights' arch rivals, the Black Knights. Also, the Druids have control over Taverley, but there isn't any formal government there that is known to players, so it's usually counted in with Burthorpe). The Imperial Guard control Burthorpe, and they are loyal to the royal line of Asgarnia, especially Crown Prince Anlaf. The Imperial Guard believes that the white knights seized power rather than being given it by King Vallance just before he disappeared. The king has not been seen for a long time, and Anlaf has recently gone into hiding for fear of capture or assassination.

The Troll Country is immediately north of Burthorpe, and there are occasional fears of raids or invasions by the trolls. Death Plateau in particular seems a threat, as many heavily armed trolls have a permanent camp there. The Imperial Guard, with help of adventurers, has been taking measures to reduce this threat.

Burthorpe also borders on the Wilderness, although there is no direct access between the two. Nevertheless, the town hosts a beacon in the Beacon Network. Adventurers are occasionally seen testing the beacons, as part of the All Fired Up minigame.

Burthorpe can be entered either from Taverley to the south, or from Death Plateau to the north-west. The games necklace provides a teleport to the Troll Invasion activity, and the Combat bracelet can teleport to just outside the Warriors' Guild. 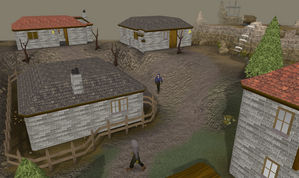 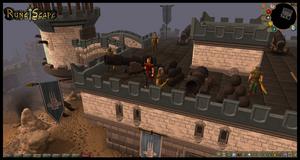 The future look of the castle and official flag.
Retrieved from ‘https://runescape.wiki/w/Burthorpe_(historical)?oldid=35267853’
Categories:
Hidden category: