From the RuneScape Wiki, the wiki for all things RuneScape
Jump to navigation Jump to search
For the achievement, see Let Them Eat Pie (achievement).

Let Them Eat Pie is a quest released on 31 January 2012. It was initially a members-only quest, but this was later changed on 4 March 2013, when free-to-play players obtained access to Burthorpe and Taverley.

Speak to Nails Newton, who is located next to the lodestone in Taverley. He explains that a greedy merchant, Rolo the Stout, is buying all the food in the area and selling it for extortionate prices that the refugees can't afford.

Nails has a forged letter authorizing all the food in the storehouses to be released for free, but he needs Rolo's seal, which he keeps in a chest that never leaves his sight, to authenticate the letter. Rolo is known for ordering expensive pies, and Nails wants your help in preparing a pie that will make Rolo feel so ill that Rolo will then leave the chest and seal behind in his dash to be sick. 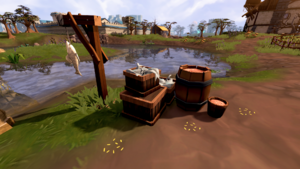 Go south then east across the bridge to find a "bait barrel" previously a "maggot-ridden troll corpse". Gather fishing bait from it. It will only allow you to take one. Take the fishing bait, then collect some wheat from the field south of that. Go north to the watermill and put the wheat and the bait in the hopper on the 1st floor[UK]2nd floor[US], operate the controls next to the hopper, and then go back down to the ground floor[UK]1st floor[US] and empty the bin to get a pot of maggoty flour (you don't need to provide an empty pot). Take the flour back to Nails and you will receive the maggoty pie shell from him.

Next, go north a short distance to the fishing spot and fish a raw crayfish. Enter the flax field to the west of the fishing spot, and you will bury and retrieve the crayfish automatically in a cutscene. Take the manky crayfish back to Nails. 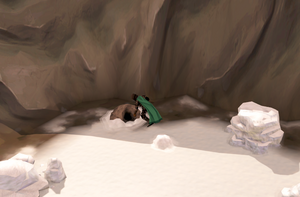 Sticking the potato in the kebbit hole... 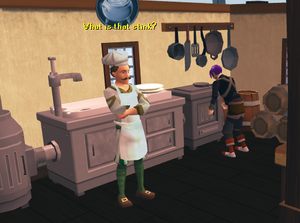 Now he wants you to prepare a potato. You can get a free raw potato from Head Farmer Jones just directly south of the flax field. Take it to the small snow covered hunting area to the west of the flax field. Use it on a hole to get a stinking potato. Use any of the three ingredients on one of the others to make a Terrible pie (uncooked), then use the uncooked pie with the pub's oven to make Terrible pie. Then go back and talk to Nails.

Nails says that the pie smells so bad that the merchant will never eat it. However he has an idea. Just west of the watermill, you will find “Foppish Pierre”, pickpocket him to get some expensive spices to disguise the smell of the pie and turn it into a mouth-watering pie. It may take several tries to get the expensive spices, as you may also receive 20 coins.

Take the pie to Rolo the Stout, upstairs of The Pick and Lute. He will eat the pie and immediately become ill. You will have a choice to listen to his puking or leave. After talking to Nails, go back upstairs and steal the seal from the chest. Take the seal to Nails, and he will use it to stamp the forged letter, which he tells you to take to Foppish Pierre. Pierre reads the letter and reluctantly agrees to open the food store. Go back to Nails and tell him of your success. 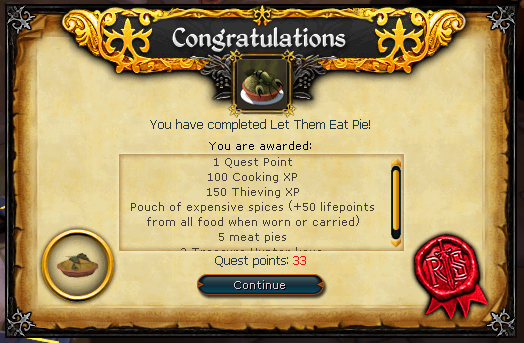 Let Them Eat Pie is not currently required for any quests or miniquests.