From the RuneScape Wiki, the wiki for all things RuneScape
Jump to navigation Jump to search
This article is about the now removed Rogues' Den minigame. For the new version of this minigame, see Flash Powder Factory. 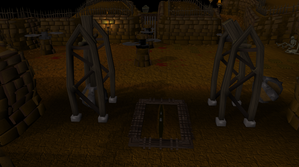 The dangerous Rogues Den, where thieves and athletes test their skills.

The Rogues' Den was a minigame where players had to go through a maze containing various traps and obstacles to reach a safe at the end. Players would then used their thieving skills to try to open the safe to receive their loot.

The maze was removed on 13 December 2011, replaced by the Flash Powder Factory. The requirements to enter the maze were level 50 Agility and level 50 Thieving. It was also recommended that Auto retaliate was turned off when playing Rogues' Den.

Rogues' Den was located under the Toad and Chicken Inn in Burthorpe. The fastest way to get there was by using a Games necklace to the Burthorpe Troll Invasion area, going south and east around the castle, and then going south-east to the inn and down the trapdoor behind the bar. See Rogues' Den for other means of getting there.

To get inside the maze, the player would have spoken to Brian O'Richard and get a Mystic Jewel. Other than the jewel, players could not take any item into the maze (nothing equipped and nothing but the jewel in inventory). To use a bank to store their items, players may speak to Emerald Benedict, who can be found near the fire.

Players could activate the Mystic Jewel while in the maze and can then choose to leave, being teleported back to the main room in the Rogues' Den. 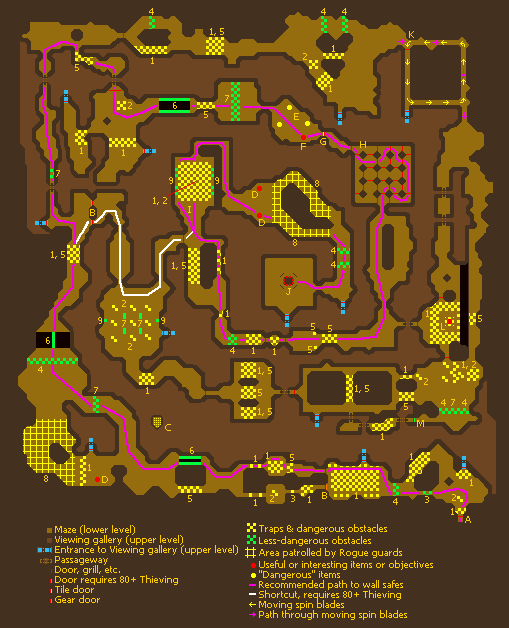 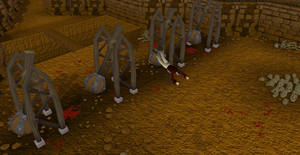 A test for your agility skills! 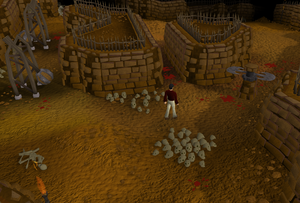 Would you like to be crushed, pierced or sliced? 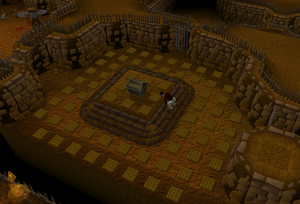 Traps and dangerous obstacles are shown in yellow on the map. You immediately leave the maze if you trigger a trap or touch a dangerous obstacle. Traps can be disarmed by searching them; this uses up thieving points. Some traps can be run past or over without triggering them, without using up thieving points. However, only run a short distance (about 3-4 squares) at a time. Longer runs can trigger a trap.

All doors in the maze are one-way: you can only pass them in one direction. This includes the doors to go to the viewing gallery and even includes the first door you use to enter the maze. Passageways, however, are two-way.

1) Floor traps of all sorts, including floor spikes and pressure pads.

6) Ledges, either hand-hold ledges or "bridges" (both less-dangerous obstacles).

A) Entrance to the maze.

B) Locked doors. Players with level 80+ thieving can pick the locks of these doors. The two locked doors in the west part of the maze open up a shortcut that is considerably quicker than the standard route.

C) This room with spikes protruding from the floor can be seen from the viewing gallery but apparently is not connected to any other part of the maze.

D) Blinding powder, which can be used to temporarily blind rogue guards.

E) The three tiles marked in yellow on the map are incorrect tiles and will not open the mosaic door.

F) The tile marked in red on the map is the correct tile for the door.

G) The mosaic door, which opens when the correct tile is inserted.

H) Grill room. There is only one correct path through the grills (shown on the map). The room is not dangerous, however, as choosing the wrong grills only results in you having to find you way back to the starting grill and trying again.

I) The "room of death". If you are OK for agility points, go along either of the side walls (you will automatically jump out of the way of the moving blades hidden in the walls). If you are running low on agility, make your way across the floor traps (either searching them or running for short distances). Always avoid going anywhere near the spinning blades on the pedestals!

J) Eight wall safes, the objective of the maze. Open any one of them.

K) Two moving, spin-blade obstacles follow the path marked with yellow arrows on the map. The door in the western corridor blocks you from moving in the same direction as the spin blades. Instead, you must move in the directions indicated by the yellow arrows. You should run down these corridors and time your run to get into the side niches before a spin blade comes through. Note: These obstacles are not on the main path to get to the wall safes. You can take this route, but it is much longer to reach the safes this way. You do have to pass these obstacles if you want to get to the chest room.

M) The gear door (not dangerous). You must solve a puzzle consisting of moving four gears to their correct positions for the door to open. You can keep trying as long as you like, and you can also just abandon the puzzle and go somewhere else without penalty. The gear door does not lead to any place interesting or rewarding. 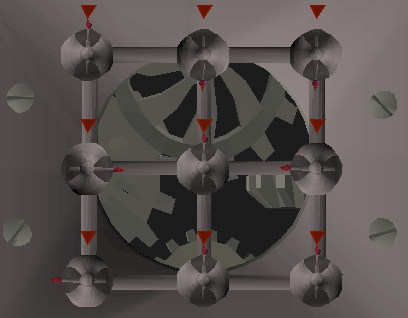 Much of this walkthrough may be obsolete due to an invisible update, such as the ability to run over multiple traps without harm. 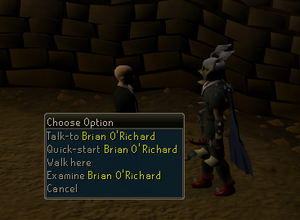 The objective of this activity is to get to the centre of the maze, without getting caught in any of the traps. With every trap disarmed, the player's thieving level is reduced by one, and similarly for every obstacle passed, the agility level is reduced by one. If either of these levels reach 0, the mini-game is over. This results in players being teleported back to the waiting room. Additionally, whilst in the maze, prayer is reduced to zero so that the Rapid Restore prayer cannot be used.

Experience is gained depending on how far the player gets through the maze. Players may also get some loot at the end of the maze, when they are given a chance to crack open a safe. Agility, Thieving and Prayer stats are restored to their normal levels when the player leaves the game either via the gem, by being caught by a trap, or by successful completion.

It is recommended to set detail to "safe mode" or to turn off textures. This is so that the spike traps will be very visible and be less annoying.

If players have run on, they can move over one floor/wall trap (one square) in one go without needing to disarm them. This is done by standing on the square before the trap and then running over it. Using this trick, players can actually complete the whole maze without having a single Thieving level drained.

In the midst of things[edit | edit source] 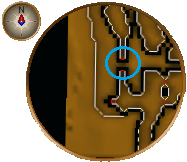 The end is nigh[edit | edit source] 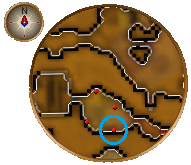 A player cracking a wall safe.

The full set gives +26 to all defence bonuses.