From the RuneScape Wiki, the wiki for all things RuneScape
Jump to: navigation, search
For the music track, see The Stalker.
For the Slayer monsters outside of Daemonheim, see Stalker creature. 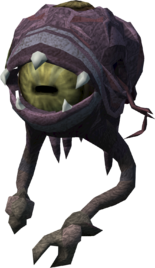 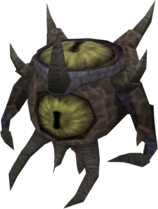 A Soulgazer; only the most skilled Slayers could defeat one.

Stalkers are a race brought to Gielinor from Ocularis by the Mahjarrat Bilrach. They resemble horrifying beasts with gigantic eyes or clusters of eyes, and often have numerous appendages. Stalkers are very intelligent creatures which possess great control over magic, to which they also have a high resistance. Bilrach summoned the stalkers, among many other races such as the savage behemoths, in order to guard the floors of Daemonheim as he was progressing.

The entity that can be considered the first Stalker spontaneously generated on a massive asteroid named Ocularis. This "father" grew an eye to observe the universe as Ocularis travelled through the depths of space, learning from everything that it witnessed. Eventually, the asteroid travelled near the planet Infernus at the same time the god Zamorak led an Avernic uprising against their former Chthonian masters. The father studied the demons as they fought, but when the war ended, the father realised that it could never truly understand the concept of life as it was a brain made from stone. To continue observing the universe more effectively, the father created the race of Stalkers that could do with the father could not: they could see what the father could not see, hear, taste, and feel. These Stalkers were sent across the universe, reporting all they experienced back to their progenitor.

Most Stalkers have the ability to levitate like Plane-freezer Lakhrahnaz. Some Stalkers prefer to rest on the ground rather than floating continuously, one example being Night-gazer Khighorahk. Others prefer places where they can suspend themselves in the air with their tentacles (Shadow-forger Ihlakhizan). Finally, Flesh-spoiler Haasghenahk's second form balances itself (though it cannot move) on its spinal cord. All crucial body functions are within a Stalker's eyeball, allowing them to undergo this trauma.

Stalkers tend to build nests, mainly used for growing and resting, but also for spawning. Some of them grow to large proportions, notably Night-gazer Khighorahk, who is about twenty times the size of a human. Some have special powers, of which Plane-freezer Lakhrahnaz is an example. This stalker can control temperatures, similar to To'Kash the Bloodchiller. Shadow-forger Ihlakhizan has control over light and shadows. Like Khighorahk, Flesh-spoiler Haasghenahk also has two forms. He can also spawn Flesh-spoiler spawns to aid him during his second form. The manner in which he fights is exceptional; he shoots his biggest eyeball out of his body and then retracts it.

Reproduction behaviour of the stalkers varies, albeit they all do so asexually, either by budding or spawning offspring in what seems to be a genderless form of parthenogenesis. Their offspring grow around the exterior of their parent's body, until maturity. Some of the baby stalkers (like those which originate from Night-gazer Khighorahk) appear as an optic nerve on the exterior of the stalker parent, which crawls out of its parent and takes residence in a nest. Others, like those which originate from Flesh-spoiler Haasghenahk grow inside their parent until the parent bursts, and the offspring crawl out. According to the sneakerpeeper, stalkers have a maturing ritual. When spawning, the spawn have to be kept wet with ooze from the eyeball to avoid them drying out and dying.

If needed, stalkers are also able to engage in conversations with humans in the human language; they do this because their own language is physically harmful to humans when heard, causing extreme headaches and heavy nosebleeding.

Stalkers have a hive-mind, which they use to communicate between themselves.

Some stalkers are able to extend their bodies through the mind, such as World-gorger Shukarhazh. This stalker in particular can immunise itself by setting wall-eyes into its chamber. It is then immune to all kinds of attacks. When its wall eye is being attacked, it will shift back to its body, being vulnerable for a moment. Then it shifts again, making weapons less effective than before.

Apart from the five bosses, there are two more species of attackable Stalkers within Daemonheim. The Seeker requires level 71 Slayer to kill and a Soulgazer requires 99 Slayer, and are fairly rare encounters.

Stalkers can also be found outside of Daemonheim in the Stalker dungeon, which requires the Dishonour among Thieves quest to access. The dungeon contains Seekers and Soulgazers, requiring 71 and 99 Slayer to kill respectively. 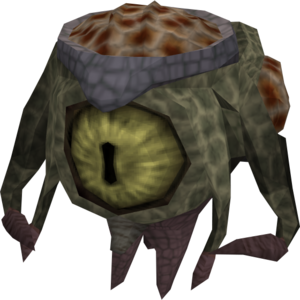 A Seeker within Daemonheim.