From the RuneScape Wiki, the wiki for all things RuneScape
Jump to navigation Jump to search
For other uses, see Thok It To 'Em (disambiguation).

Thok It To 'Em (saga) is a Fremennik Saga during which the player experiences an adventure through Thok's eyes.

The following must be completed to reach 100% completion and receive the unabridged tome.

Defeat the following bosses and retrieve a trophy from each without ever dying. You can use all Thok's adrenaline in the fights because it recharges fully when you defeat the boss. Similarly, don't over-eat food unless you would die otherwise, as Thok heals a lot (but not fully) after defeating the boss.

The following are not required for 100%: 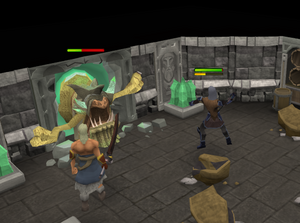 As Marmaros, you must defeat Stomp without food or prayer. Thok is there to help attack Stomp, but he doesn't help you charge the lodestones because he keeps trying to attack Stomp.

Once Stomp is defeated, you gain control of Thok. Marmaros has been injured, so you must venture deeper into Daemonheim to help him. After the fight, climb down the ladder. 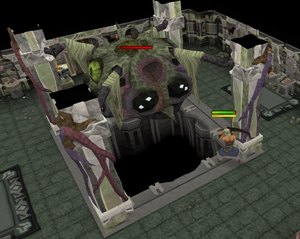 Thok attacking Thing with eyes with a special attack.

As Thok, you must defeat thing with eyes without food or prayer. Run into the shelter of the pillars when this chatbox message appears "Eyeball thing glowing now." However, Thok is much more powerful than Marmaros and can hit over 1170. This battle should not be too difficult.

In the first room after you defeat Thing with eyes, it will appear you reach a dead end. The room has a door with a Prayer requirement level of 10 (while Thok has a prayer level of zero, and there is no prayer altar anywhere) and a silver crescent lock. Simply "Exorcise Dark Spirit", whereupon the spirit will say "You need a prayer level of 10 to exorcise this spirit". However, simply continue the conversation and Thok will order the dark spirit to go away after a brief dialogue.

Thok must navigate a small dungeon. If you simply go through the dungeon without using the keys, there will only be enemies to fight. Puzzles and extra bosses required for the unabridged version only appear behind locked doors.

The next few rooms contain several level 82 enemies. They are fairly easy to kill, and occasionally drop food.

Once the rock is fully charged, keep going through the rooms until you encounter the Coward with bow.

You must protect the Pretty Lass from the Warped Gulega. This is not too difficult as long as you run out of the way when the Gulega surrounds you with tentacles, as he will slam you and reduce your life points to 1 otherwise.

If you are not confident of evading this attack every time, you could lure the Warped Gulega to the entrance by entering and exiting the room. From then on, you could fight it while being close enough to Pretty Lass for her to heal you. This makes it impossible to lose as she would heal about 700 life points immediately after the Warped Gulega's special attack and before its next hit. You can also counter this by finding any Cave Morays, or "Sea meat" from the Forgotten Rangers/Warriors and Nechryaels before.

Do not talk to the Pretty Lass about returning to Marmaros unless you want to finish abridged (meaning you haven't killed the rest of the bosses). If you wish to finish the unabridged version, walk away and kill the remaining bosses. After telling Pretty Lass to follow you to Marmaros, you will be instructed to get "something cold" for Marmaros.

At this point, Pretty Lass tells you that you must find something cold for Marmaros. You will get 10 "Sea meat", and anything else that you had before the Warped Gulega. 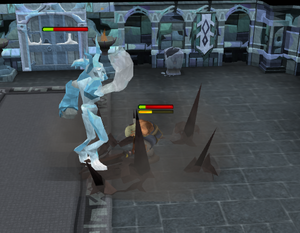 Thok must now defeat the walking icecube. This time, you will have food. It is easiest to let the icicles damage you until you are nearly dead (the icicles cannot kill you), eat one sea meat (which should give enough life points to last until the next barrage of icicles), and repeat. You will use the icefiend's body as "something cold," thus concluding the abridged section.

After killing the icefiend, you are done. After killing it also, you and Marmaros are talking in the Occult Floors. Either click somewhere or listen to the conversation to end the saga. 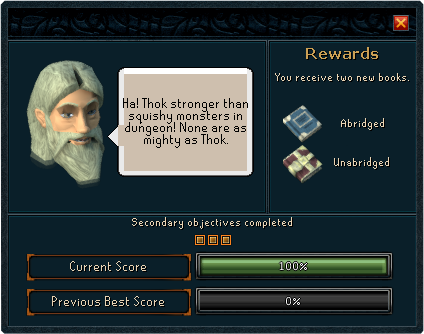 The saga is always re-playable regardless of the completion percentage. However, the player will only receive the rewards the first time that the objectives are completed.