From the RuneScape Wiki, the wiki for all things RuneScape
Jump to navigation Jump to search
The Old School RuneScape Wiki also has an article on: osrsw:Grunsh

Grunsh is an ogre shaman that plays a significant role in the Forgettable Tale of a Drunken Dwarf, Forgiveness of a Chaos Dwarf, and Birthright of the Dwarves quests, and is the tertiary antagonist of the Rise of the Red Axe quest series. During the quest, it is revealed that The Red Axe is using Grunsh to cover up their operations and turn Dwarves kidnapped from East Keldagrim (the poor side of Keldagrim) into Chaos dwarves, with the help of gnome technology from Arposandra. 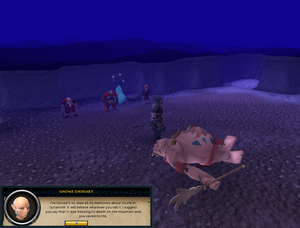 Some time before the rise of the Red Axe, Grunsh was kidnapped by gnomes and had all memory of his life in Gu'Tanoth erased by Laneel, who was working for Hreidmar. The gnome then suggests that, as long as it was told what happened and what to do, it would be an unquestioningly loyal and valuable minion. This is when Hreidmar convinces the ogre that, upon waking up, it was saved by the dwarves from a freezing mountain. As Grunsh had his memory wiped, he believed it and became a valuable asset to the Red Axe.

Once awake and partially healed, Grunsh could remember nothing. Grunsh soon proved to be intelligent by ogre standards, capable of casting magic. As dwarves do not use magic, Hreidmar soon saw the value in having a mage on his side and recruited Grunsh as employee #38262.

During Forgettable Tale of a Drunken Dwarf, the adventurer attempts to understand the ravings of a drunken dwarf, who the Dwarven Black Guard believes may have information related to the recently departed Red Axe.

The adventurer infiltrates a hidden Red Axe facility after some time, only to realise that the dwarf's memory was altered by Grunsh. The dwarf, while exploring the mines in which the Red Axe was hidden, discovered that The Red Axe was working with the gnomes of Arposandra in an effort to gain control of Keldagrim. He was captured by the Red Axe and brainwashed by Grunsh, leaving him with little memory of the incident and craving for beer and kebabs. In his now alcoholic state he would not be believed.

The adventurer suffers a similar fate; while observing a procession of artificially manufactured chaos dwarves, they are caught and brainwashed, leaving them with no memory of their discovery. They then go on a drunken rave in the Laughing Miner Pub, effectively rendering any remaining memories unbelievable.

Only Commander Veldaban, the commander of the Black Guard regiment in Keldagrim, suspects that their memories may have been altered magically.

During the quest, it is revealed that Grunsh had been using his memory magic in order to turn ordinary dwarves into Chaos Dwarves for the Red Axe's vile purposes.

In Birthright of the Dwarves, Grunsh is ordered by Hreidmar to alter Veldaban's memories to make him give up the crown. Grunsh does so, but the adventurer, having brought a wand of their own to protect against his abilities, uses it and sends everyone in the room into a trance. The adventurer restores Grunsh's memory, who then learns that he was kidnapped from his home by the gnomes and brainwashed to serve the dwarves and advance their atrocities.

Grunsh, seeing that he himself was a victim, resigns in defeat. The adventurer has the option of sparing him for being a victim himself, or killing him for altering the minds of countless dwarves.

If spared, Grunsh is thankful for the adventurer's mercy and leaves the dwarven lands to return to his true home. Upon arriving, he brainwashed himself to remove the atrocities he had committed for the Red Axe. The adventurer can visit Grunsh in Gu'Tanoth's marketplace, where he does not recognise them, but is able to recall that they did something nice for him.

This information has been compiled as part of the update history project. Some updates may not be included - see here for how to help out!
Retrieved from ‘https://runescape.wiki/w/Grunsh?oldid=35826750’
Categories:
Hidden categories: