Bogrog is an ogre in Gu'Tanoth. He sells Summoning Supplies, which is quite useful since he is near a Summoning obelisk. Players can make Summoning pouches, then swap them for shards. You must have a summoning level of 21 before he will swap shards with you.

He can be found on a sidepath just before the entrance to the city, so players will not need to start the Watchtower quest before talking to him. He will accept noted pouches.

Players with access to Prifddinas may prefer to use Lord Amlodd who will exchange pouches on the same terms as Bogrog. Having completed the hard Tirannwn achievements will make Lord Amlodd swap pouches for roughly 10% more shards. 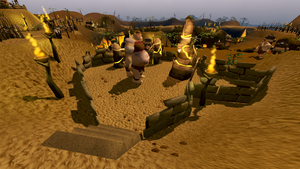 Getting to Bogrog is fast using the following methods:

In the Perils of Ice Mountain update of 7 May 2008, Bogrog gained the ability to swap Summoning pouches and Summoning scrolls for spirit shards.[1] For each pouch, he will trade a player 70% of the spirit shards required to make that pouch. For example, a granite lobster pouch requires 166 shards, so Bogrog will give 117 shards for the pouch. The amount of shards is rounded up to the nearest whole number, so while 166 * 0.7 = 116.2, the player will receive 117 shards due to the fact that it is always rounded up. Bogrog accepts noted and unnoted pouches. He is not as generous when it comes to swapping scrolls, since he will only return about 30% of the spirit shards. In other words, he will pay only 3% of original from one scroll (totaling to 30% for 10), not 30% for each scroll. It does not have to be in multiples of 10 scrolls.

It is usually better to high-alch the pouch or sell on the Grand Exchange for those pouches created with lower amounts of shards; except for some of the higher level pouches where a player can save money by swapping with Bogrog. See Summoning pouches table for comparisons.

There is one limitation in that the player must have a Summoning skill higher than the level required to make the pouch. Bogrog will tell the exact skill required when the player clicks the "value" option on the pouch; the value is a sliding scale starting at level 21 for all pouches of level 10 and below and decreasing gradually from there. He will also exchange scrolls for shards. To dispose of a large amount of shards quickly (Pikkupstix buys in multiples of 50 and the GE has various limitations) visit a pet shop in Yanille or elsewhere.

For a calculator showing the profits of swapping shards, see Calculators/Shard swap.

How many spirit shards do you need to buy?[edit | edit source]

Bogrog attended the 2011 Christmas Event Banquet. Wizard Acantha sits to the right of him and Sanfew sits to the left. Bogrog sits in a bigger chair than almost everyone else because of his size.