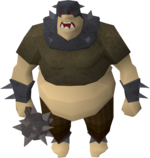 The Khazard ogre is a monster encountered during the quest Fight Arena. He is a champion among the fighters, and has been responsible for the deaths of many of General Khazard's slaves. The player must kill the Khazard ogre during the quest in order to save the lives of Sammy Servil and Justin Servil, who were captured and forced to fight in the arena.

The Khazard ogre is the first monster fought during Fight Arena, followed by the Khazard scorpion, which is slightly tougher. After this, Bouncer, the General's pet hellhound is fought and the option of killing General Khazard himself. The ogre fights with simple melee attacks, and so the Protect from Melee prayer can be used if need be.