From the RuneScape Wiki, the wiki for all things RuneScape
(Redirected from Red Axe)
Jump to navigation Jump to search
The Old School RuneScape Wiki also has an article on: osrsw:The Red Axe 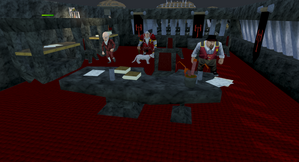 The Red Axe's office. From left to right: a Gnome emissary from Arposandra, Hreidmar's Cat, Hreidmar, and the Red Axe Secretary.

The Red Axe was a Dwarven mining company and a member of the Consortium of eight mining companies which rules Keldagrim. It was led by a dwarf named Hreidmar, and was considered to be largest and most influential of the mining companies.

The Red Axe serves as the antagonist in the Rise of the Red Axe quest series. When Hreidmar's face was not put on the giant statue's face, he left the city, taking the Red Axe and an army of chaos dwarves with him and later made several attempts to conquer Keldagrim. The company allied itself with the Gnomes of the hidden city of Arposandra, who supplied the Red Axe with technology critical to their plans. Gnomish help also included the gift of Grunsh, a brainwashed Ogre Shaman who specialises in memory magic.

The Red Axe's foundation goes back long ago. Hreidmar was the last known director of the company. They dislike humans in general; only dwarves can work for the company.

With Hreidmar's leadership, the Red Axe became one of the most well-known and influential companies on the Consortium. Hreidmar had learned that he was a descendant of King Alvis, and thus believed that he had the right to rule. Knowing that the Consortium was a powerful entity as a whole, he secretly plotted to ensure complete control over the city. He was able to establish ties with the gnomes of Arposandra, who gave him the technology to convert dwarves into chaos dwarves and an ogre shaman named Grunsh, who specialise in memory-erasing magic.

Hreidmar began kidnapping dwarves from the slums of East Keldagrim. These crimes were overlooked by the city's Black Guard, seeing it as insignificant. Only one of them, Veldaban, took concern to this, but the higher-ups denied his request for an investigation. A majority of employees were either unaware or ignored the situation.

In the Hunt for Red Raktuber quest, four dwarves from the Red Axe, Glosur, Medwin, Baden, and Obert, joined the KGP because they believed the Red Axe took too long to take action. Thus, they took things into their own hands, teamed up with the penguins, and aided them in their plans to take over Gielinor.

The following takes place during The Giant Dwarf.

In year 169 of the Fifth Age, Hreidmar took the opportunity to begin ruling Keldagrim. When the city began opening to human visitors, he bribed one of the boatmen to crash their ferry into the statue of King Alvis, so that the human could be framed for the crime. With the destruction of the statue, the Consortium began arguing over whose head should replace the statue. Hreidmar vouched for himself as he had the most influence of the eight companies.

Veldaban released the human from custody, as it was not their fault for the statue's destruction. He then asked them to help the Consortium decide, which they did. The adventurer had the opportunity to speak to the Red Axe, but the company's no-human policy caused them to be shunned. This policy would prove fatal for Hreidmar, as the human ended up vouching for another company, which was forwarded by the others, save him. Hreidmar withdrew the company from the Consortium in protest to their decision.

Veldaban, suspicious of the Red Axe's activities, had the adventurer investigate them following news of kidnappings in East Keldagrim. The adventurer discovered the Red Axe were plotting to take over Keldagrim, but they were caught and Grunsh proceeded to have their memories erased.

Hreidmar send a few chaos dwarves to cause chaos in the city. One of these dwarves was Veldaban's ex-girlfriend, Hilda, who killed several Black Guard with a hand cannon before being killed by the adventurer. Seeing this caused Veldaban to confirm his suspicions and he led a personal investigation with the adventurer, where they found captive dwarves from East Keldagrim being held against their will. They also witnessed the first-hand conversion of normal dwarves to chaos dwarves, escaping the facility. Veldaban reported this to the Supreme Commander, but he refused to investigate further, causing Veldaban to resign in disgust.

As the facility was partially compromised, Hreidmar sent groups of chaos dwarves and chaos dwogres to protect the facility, who continue to attack the Black Guard even after its downfall.

Despite the facility being compromised, Hreidmar continued with his ambition of becoming the dwarvern king. With opposition to the Consortium growing with their disregard of East Keldagrim dwarves, he sent several chaos dwarves as suicide bombers to sabotage the city's Lava Flow Mine. As expected, the Consortium immediately sent some Black Guard members not to save the injured and recover the dead, but to repair the machinery. He also placed an army outside the city to besiege it should he be denied his right.

As expected, the decision to repair the machinery did not bode well with the protestors. Hreidmar rallied the protestors to call for a king, knowing that he was the descendant of Alvis, and thus, be appointed to rule. Veldaban, with the assistance of his human friend and fellow dwarf Meike, manipulated the papers to state that Veldaban was Alvis' descendant, fearing what would happen if Hreidmar was appointed king. The army outside Keldagrim was also dealt with by Pretty Flower's tribe, after the adventurer manipulated his pride to believe that Colonel Grimsson was making fun of him.

The Consortium took out the papers and proclaimed Veldaban to be king, much to Hreidmar's anger. He then tried to send his army to forcefully take control, but it was destroyed by Pretty Flower's tribe. Hreidmar then fled from the city.

Hreidmar realised that he was 148 years old, which in turn meant that he would only have two years to rule if he was appointed king. He intended to enjoy his rule, but because Veldaban had ruined it, this ambition was ruined. He surmised that if they would not make him king, he would simply do so himself with his chaos dwarf army, building his own lava flow mine and palace. The Red Axe quickly fell apart, as the higher-ups abandoned their employees in the city and stopped kidnapping dwarves from East Keldagrim.

Veldaban became paranoid over the lack of activity and asked his human friend to stop them once and for all. In the ensuing battle, Hreidmar was killed.

After the operation, the adventurer discovered the chaos giants inside Barendir's tunnels. These were the strongest creations of the Red Axe, but they could not be controlled; as such, they did not participate in any Red Axe operations. 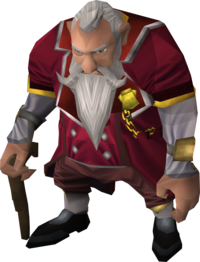 Hreidmar, leader of the Red Axe.

According to their archives, the Red Axe had nearly 40,000 employees by the time Grunsh was found. As such, it is very possible the company has since passed that number.

Two machines used for the conversion to chaos dwarf.