From the RuneScape Wiki, the wiki for all things RuneScape
Jump to navigation Jump to search
The Old School RuneScape Wiki also has an article on: osrsw:Grundt
Not to be confused with Grendt, Brundt, or Brundt the Chieftain.
Grundt? (edit) 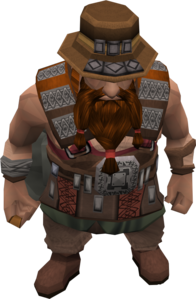 Grundt is a member of The Red Axe and can be found trading in Jatizso with Brendt during The Fremennik Isles. Apparently, he once ate 14 meals in one day.

During the events of Birthright of the Dwarves, his and Brendt's arrest were warranted by King Veldaban of Keldagrim for suspected Red Axe espionage. The two were detained in the Records Chamber, along with Vigr and Klaas, and to be questioned by that same adventurer. Grundt attempted to talk himself out of it by stating that he always carried a red battleaxe with him, hence King Sorvott's confusion, but this did not match with Brendt's story. When his cover was blown, he begged for his life to be spared, promising to never go near the Red Axe again, unlike his companion, who proclaimed Red Axe victory and swore vengeance.

During and after the quest, he is replaced by the similarly named Grendt on Jatizso. If spared, he may be found inside the King's Axe Inn in Keldagrim, and if exiled, to the south of Yanille. He is thankful, and if south of Yanille, claims to be enjoying the sea breeze.

This information has been compiled as part of the update history project. Some updates may not be included - see here for how to help out!
Retrieved from ‘https://runescape.wiki/w/Grundt?oldid=35627176’
Categories:
Hidden categories: