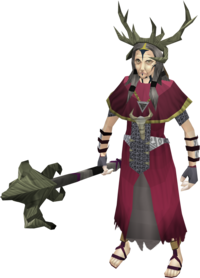 Ikadia the Exile is the elderly leader of the chaos druids in Taverley Dungeon. She is a descendant of Urval, whose title she bears in his honour. Urval preached that Zamorak is supposedly the perfect incarnation of Guthix, using chaos to achieve balance.

She is found and fought during the grandmaster quest Birthright of the Dwarves. She first appears after killing some of the chaos dwarves in Taverley Dungeon and offers information about them if the player has defeated her in combat. She uses a variety of Magic abilities against the player in battle, much like NPCs from Wilderness Warbands.

Ikadia will typically open up the fight by using Combust on the player. Afterwards, she'll try to stun them with Impact, following up with Wrack if it succeeds or Chain if it fails. Once her adrenaline level reaches 50%, she'll throw Wild Magic and Asphyxiate into the mix. These abilities can deal over 1,000 damage, but the latter can be mitigated with careful use of Freedom and Anticipation. If her adrenaline bar fills completely, she will use either Metamorphosis or Omnipower, which can hit over 2,000. She only uses Freedom if she is stunned or affected by a damage-over-time effect.

After her defeat, Ikadia will tell the player about the chaos dwarves in Taverley Dungeon, after which the player can select to spare her life or kill her. After the quest, if left alive, she serves no purpose.

Transcripts Ikadia the Exile speaks in:

The update history project is a work-in-progress – not all updates to this topic may be covered below. See here for how to help out!
Retrieved from ‘https://runescape.wiki/w/Ikadia_the_Exile?oldid=33974612’
Categories:
Hidden categories: