From the RuneScape Wiki, the wiki for all things RuneScape
Jump to: navigation, search
This article is about the race. For the specific monster, see ogre.

Ogres are a race which dwells upon Gielinor. They originated in Yu'biusk and Bandos had legions of ogres fighting in his armies to take control. Ogres appear as huge, giant-like humanoids weighing up to a ton in muscle and fat, they have white skin and "dark" brown rags for clothes. Ogres have poor technology and are a tribal race with constant wars and rivalries. Their main weapons are spears, clubs, maces, and bows, while others just use their bare hands.

Ogres can be as unintelligent as trolls, though they are more creative, with better rules and a more religious and cultural society.

During the wars, like many of Bandos' other followers, several subspecies of ogres were created in order to spread Bandos' influence, such as the mogres and jogres. Virtually nothing is known about them. 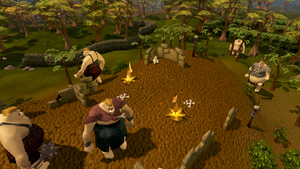 A Group of ogres

The common ogres are the most well-known amongst Gielinor's inhabitants. They reside in Feldip Hills, in two cities; male ogres live in Gu'Tanoth, where they have enslaved the Skavid race as their servants. There are several smaller tribes scattered around the city, where they constantly feud over who is the strongest. Female ogres live in Oo'glog, further south from Gu'Tanoth.

Unlike other races, the ogres of Feldip Hills live separately from each other; ogres live in the city of Gu'Tanoth, while ogresses live in the city of Oo'glog. According to Chief Tess, inhabitants from the two cities visit each other "once every few seasons" and when they visit, they feast and share tales from their shamans, with one instance in which both groups went to meet each other, but found no one when they arrived. The idea of living together is foreign for them, as Chief Tess laughs at the player's suggestions of having the ogres live together.

Scholars have tried to understand this seperation, but the only reasonable assumption they come up with is that ogre women terrify the males so much that they have driven them north to Gu'Tanoth.

Female ogres are known as ogress and are stronger than the males. They have their own village, Oo'glog. They are considerably less aggressive towards other races, though their natural strength meant that many tended to avoid them out of fear. This was mainly in part to Balnea's influence, who wanted to turn their village into a spa resort after seeing the unique properties of their mud baths.

Ogre religion is shaman-like, and they can summon as part of their magicks. The shamans are highly respected and feared by ogres as Bandos' representatives on Gielinor.

Ogre children are likely to be cared for by the ogresses, regardless of their gender. With the except of Bug and Fycie, Rantz's children (who live with their father, away from the other ogres), all known ogre children are found in Oo'glog.

The ogres had a burial mound at Jiggig where they buried there dead there, although they were forced to find another location when the site was sabotaged by Sithik Ints, a H.A.M member. They have yet to find a new location to bury their dead.

Species of ogre that count for Slayer assignments[edit | edit source]

This information has been compiled as part of the update history project. Some updates may not be included - see here for how to help out!
Wikipedia also has an article on: wikipedia:Ogre (race)
Retrieved from ‘https://runescape.wiki/w/Ogre_(race)?oldid=32655830’
Categories:
Hidden categories: