Forgettable Tale of a Drunken Dwarf

Forgettable Tale of a Drunken Dwarf is the second quest in the Dwarf (Red Axe) quest series, in which you must track down clues to find the truth behind the Red Axe corporation. It is the sequel to The Giant Dwarf quest.

Forgettable Tale of a Drunken Dwarf is part 2 in the Rise of the Red Axe series, focusing on the dwarves and their capital city of Keldagrim. After the events in The Giant Dwarf, the Red Axe Mining Company has departed the city and set up a new headquarters in a remote underground location.

Veldaban, the Commander of the Black Guard in Keldagrim, wants you to investigate the case and find out if the Red Axe is planning anything nefarious. The problem is, the only lead he's got is an extremely drunken and kebab-obsessed dwarf.

Use your Farming and brewing abilities to your advantage, then prepare to be perplexed by puzzles as you follow the trail to the Red Axe...

To start this quest, talk to Veldaban, Commander of the Black Guard in the Black Guard H.Q., west of the Keldagrim bank (you can reach the city via multiple ways). He is rather shocked to tell you that, after the incident at the end of The Giant Dwarf, the Red Axe company has left Keldagrim and will soon be kicked out of the Consortium.

However, he finds it rather suspicious and wants you to investigate the mining group. The only lead they have currently, is a dwarf living in east Keldagrim who expresses strange behaviour when the company is mentioned. 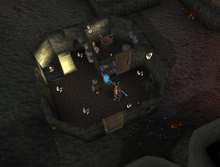 Agree to help Veldaban and you will automatically be transported to the dwarf's house just north-east of Kjut's Kebabs store in east Keldagrim. Ask the dwarf about the red axe, and the dwarf will ask you for a drink. Talk to him again to give him a beer – you can buy one from the Laughing Miner or the King's Axe Inn for two coins. He, however, wants "some of the REALLY good stuff", which is an incredibly alcoholic drink called Kelda Stout.

To make the drink, you need to grow some kelda hops from 4 kelda seeds, possessed by some of his drunken friends – namely Khorvak, Gauss and the rowdy dwarf. 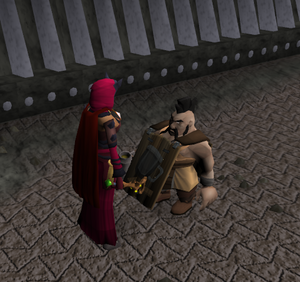 Speaking to the Rowdy Dwarf 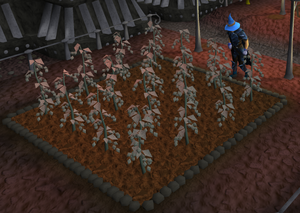 Once you have all the four seeds, go to the hops farming plot in front of the palace in West Keldagrim and east of the bank. Ask Rind the gardener for advice on planting the seeds there, and he tells you that for some reason, sunlight is harmful for kelda seeds and hence you can only grow it underground.

Weed the garden using a rake, plant the hops, and wait 5 – 20 minutes (a supreme growth potion cannot be used). You don't have to be online, but you'll get a notification when the hops are ready saying: "Perhaps I should take a look and see if my Kelda hops have grown...". The hops don't require attention or water and cannot get diseased. Fortunately, they are known for having a remarkably fast growing speed.

If you need something to pass the time, you can talk to Rind the gardener and deliver a letter for him; you must take it to Elstan, the gardener at the allotment south of Falador (you can quickly reach him using the cabbage port from the Explorer's ring 3 or 4), then go back to Keldagrim to Rind to get two herb (marrentill) seeds.

When your seeds have grown, pick the Kelda hops. 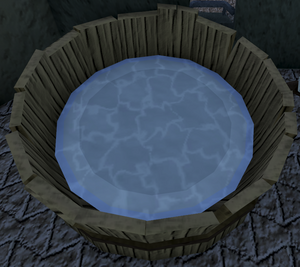 The fermenting vat after Kelda Stout has fermented

Go back to the bar in East Keldagrim. Go upstairs and use two buckets of water on the fermenting vat, add two barley malt, the Kelda hops, and finally pick up the empty pot in the corner of the room and ask Blandebir to fill it up with ale yeast for 25 coins. Put this in the vat, then wait 5–20 minutes. You do not have to be online, but you'll get a notification when the ale is ready saying: "Perhaps I should have a look and see if my Kelda brew has brewed...". The colour of the liquid in the vat will change from translucent/dark into a white/opaque colour with a ring when it is close to being done. Attempting to make the Kelda Stout in another brewery results in the message These special hops need to be brewed in the Keldagrim brewery. Oh well... appearing in the chatbox.

When the stout has fermented, turn the vat valve and use a beer glass on the barrel. Go back to the Drunken Dwarf and use the option that says "I need to know about the Red Axe" to give him the Kelda stout.

If you happen to destroy your hops, or not allow the brew to ferment, you can return to the Gardener and get another set of hops.

The dwarf tells you about how quite a while ago, he resigned from his company, the former Magenta Accordion. He went to the now-abandoned southern Keldagrim mines to explore and accidentally "almost fell into the abyss and encountered pink dragons", amongst other things.

Head to the mine tracks to the south and speak to the southernmost cart conductor (south of the tracks). Ask him about the closed off tunnel, to which he mentions that it cannot be opened unless the Consortium orders so, so you must go talk to an influential friend.

Return to the Consortium and talk to the director of the mining company you joined during The Giant Dwarf on the 1st floor[UK]2nd floor[US]. If you do not remember which mining company you joined, you can either speak to Veldaban to be reminded or speak to each Director until you are recognised. They'll be glad to open up the tunnel for your help. With the boards removed, ride the southern cart into the tunnel, ensuring that both weapon and shield slots are empty.

You find yourself before a gigantic abyss at the end of the cart ride. A short cutscene shows the vastness of the area, along with tracks floating out in all directions. You can only proceed through one of the many exits on the other side of the chasm.

If you log out at anytime while in the cave, you will be transported out in the city, and your progress will be saved. 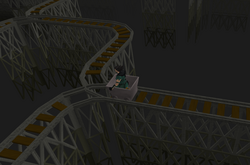 To do so, you need to complete a cart puzzle. Collect the square stones from the box next to the controls and set them in the dwarven machinery so that you can travel to both the blue marks and the destination red cross. The highlighted line controls the path the cart will take.

Your goal is to set up a connection between the red square all the way to the left and the boxes that are to the right. To place/rotate a stone in a junction, click once for green, twice for yellow, and three times to remove the stone.

In this room, you eavesdrop on a conversation between Hreidmar, an Ogre Shaman, and a Red Axe Henchman discussing the cross-breeding of dwarves and ogres. You learn that The Red Axe bribed the boatman into deliberately crashing into the statue so that they could blame it on a human in the quest The Giant Dwarf. Crawl through the hole at the opposite end of the room from where you entered.

You'll now be in another mine cart abyss. Search the box to receive 2 yellow and 1 green stone. 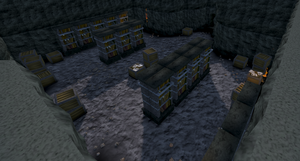 You appear in a small archive room, with a number of bookcases and crates, the ones with visible contents being searchable.

Read through each document and continue your exploration.

Room 5: Yet Another Chasm[edit | edit source]

Moving forward from the reports room, you arrive at the final chasm. Search the box for 2 yellow and green stones. 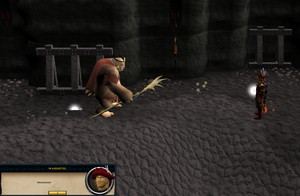 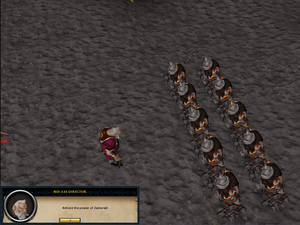 The army of Chaos Dwarves

A cutscene starts, where the Red Axe director will show off his army of Chaos Dwarves. But before you can report to Commander Veldaban of what you've seen so far, Grunsh the Ogre shaman catches you prying into their plans and casts a spell that eliminates all your memories of the caves.

Go back to Commander Veldaban. Alas, you don't remember any of what had happened, but your instincts will tell you to go to the Laughing Miner pub and have a beer and kebab.

Buy a kebab from Kjut, the store owner on the east side – immediately south-west of the Drunken Dwarf's home – and a beer from the pub to the south. Once you're inside, drink the beer; you will automatically eat the kebab and begin a humorous cut-scene. You must do this inside the pub, anywhere else will result in dialogue that you have an urge to have a beer and a kebab at the Laughing Miner pub in East Keldagrim. 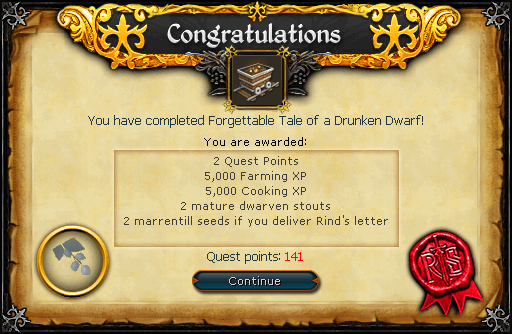 Forgettable Tale of a Drunken Dwarf is directly required for the following quests/miniquests:

Beer and Kebabs
A non-unlockable music track that plays when you are drunk, it is a remix of Tale of Keldagrim