In Search of the Myreque

In Search of the Myreque is the third quest in the Myreque quest series. The enigmatic stranger Vanstrom Klause asks you to deliver weapons to an organisation called The Myreque, but things do not turn out to be as they seem.

A new stranger has appeared in Canifis with a job to track down some local heroes known only as "The Myreque".

The Myreque are fighting a desperate battle against the darkness of Morytania and he wishes to take them weapons to aid in the battle. Can you help him out?

Before you begin, make sure to recharge your prayer points in case your druid pouches drop too low.

Speak to Vanstrom Klause, a man in brown clothes, in the corner of the Hair of the Dog tavern in Canifis. He tells you about The Myreque, an organisation fighting vampyres, which is currently low on weapons and needs an arsenal of steel weapons to survive; Vanstrom doesn't have the time to bring the weapons to his friends he has never actually met yet. If you agree to help Vanstrom, he will also tell you about a boatman in Mort'ton who is rumoured to be able to show you the Myreque hideout.

On the route to Mort'ton, ethereal ghasts will attack you, siphoning any food from you and rotting it in the process; if you have a charged druid pouch, an item will be subtracted from the pouch instead. Make sure to have plenty because five items are needed in your pouch when you reach your destination. For more information on refilling the pouches, click here. Alternatively, take six mort myre fungus so that you can fill the pouch twice once you arrive in Mort'ton.

Enter the gate south-west of Canifis, near Ulizius, and keep going south, following the River Salve until the Nature Grotto looms up east of you. Exit the swamp south and go along the twirling path to arrive in the plagued village of Mort'ton. Head east until you find Cyreg Paddlehorn at his boat, and talk to him. 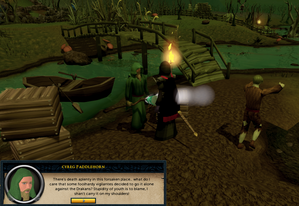 Trying to convince Cyreg to let you use his boat

Attempt to persuade Cyreg to bring you to the Myreque. Cyreg will be very secretive about how to find them though, so you will have to choose the correct sequence of responses to make him feel guilty in order for him to allow you to use his boat. Choose the following responses in this order:

If you haven't filled your druid pouch yet, you should fill it now. Talk to him again afterwards, and he will agree to take you, but he needs 3 wooden planks. They are sold in Razmire Builders' Merchants, Mort'ton's general store, but you must have (partially) completed Shades of Mort'ton and cured Razmire Keelgan with Serum 208 to use it. When you give Cyreg the planks, he will give you directions and you can now finally board the boat, though he won't let you travel unless you are carrying your druid pouch with at least five charges and 75 steel nails.

Once you land at The Hollows, go directly north, avoiding the ghasts, until you see a strange tree. The bridge is visible on the minimap. Climb up to see a damaged rope bridge. Mend the bridge as you walk along, which requires 1 plank and 25 steel nails per platform (total of 3 planks and 75 steel nails), and then climb down the other side of the bridge.

Go north to the strange-looking hollow tree and talk to Curpile Fyod out front. Tell him you've brought the weapons for the Myreque and then answer some questions for him to prove that you are indeed telling the truth. If you fail to answer the questions correctly you will be knocked unconscious and wake up at the boat again, but luckily the bridge will require no building the second time. Here are the answers to the possible questions:

Head behind the huge tree and open the doors, which Curpile will unlock once you answer the questions. Go in and follow the tunnel. Follow the wall until you see stalagmites, and click the "squeeze-past stalagmite" option to find a cave filled with Myreque members.

Start off by talking to Veliaf Hurtz, who will tell you to talk to all of the others, and then come back to him. It shouldn't be necessary to actually ask any questions of them, just saying "OK, thanks" and going to the next one works. They will speak about themselves, and the Myreque. 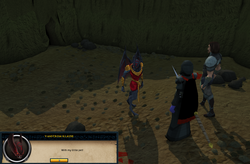 When finished, give the weapons to Veliaf. A cutscene ensues where a strange mist envelopes the room and Veliaf realises that it is a vampyre. The mist shifts, revealing Vanstrom Klause, the stranger you were trying to help. He kills Sani Piliu and Harold Evans with a magic attack and transforms into his vampyre form. After performing the murders, Vanstrom disappears, before summoning a level 44 Skeleton Hellhound ("his little pet") to finish off the remaining members. In order to regain the Myreque's trust after having lured Vanstrom to them, you must kill the hellhound. 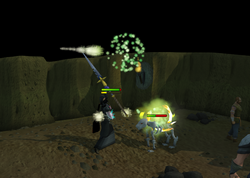 The hellhound has low life points, but hits fairly hard; the fight should be fairly easy for players with a combat level above 80. On death, the hellhound will drop two uncut rubies and four big bones. Talk to Veliaf and ask him how to leave the hideout, and he tells you about a secret passage to Canifis. Leave the chamber, and search the wall at the end of the tunnel to open it; you can now use this door freely. Climb up the ladder to emerge behind the Hair of the Dog tavern.

Do not teleport to Canifis or leave the hideout by any other method, because the dialogue with the Stranger will not allow you to end the quest.

Go into the tavern once more and talk to the stranger where Vanstrom Klause used to be. You mistake him for Vanstrom, but he claims to be an everyday random man. Confused, complete the conversation anyway and you'll finish the quest. 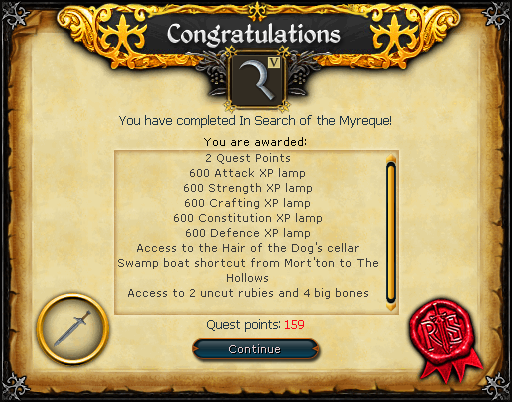 In Search of the Myreque is directly required for the following quests/miniquests: