From the RuneScape Wiki, the wiki for all things RuneScape
Jump to: navigation, search
The Old School RuneScape Wiki also has an article on: osrsw:The Hollows 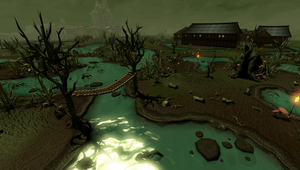 The Hollows is an area in the middle of Mort Myre Swamp that gets its name because of the caverns and tunnels that lie underneath that section of the swamp.

The Hollows are a somewhat remote area of the Mort Myre Swamp. Players who have completed the Priest in Peril quest can walk to them directly. Players who have started or completed the quest In Aid of the Myreque can reach them via a cave from Canifis or by using the boat of Cyreg Paddlehorn in Mort'ton, for a fee of 10 coins. (The boat journey from the Hollows back to Mort'ton is free.) Fairy ring DLS also provides quick access to the Hollows, as described below.

The Hollows are fairly close to some Hollow trees, which can be chopped using the Woodcutting skill for bark. The bark is used in making of Splitbark armour, an armour for mages.

In the God Wars, The Hollows were a battlefield for Zamorakians and Saradominists. Soon the Zamorakians took over and advanced to other areas.

Caves under the Hollows[edit | edit source]

The caves under the Hollows featured in some of the quests in the Myreque quest series. The caves are also used by other players, since they are a faster way to reach Mort'ton and Burgh de Rott than the way through the Mort Myre Swamp. Some players also use them to access the Blood altar and Meiyerditch itself.