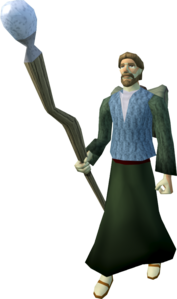 Abidor Crank is a man that players can encounter during the Temple Trekking minigame. The event he appears in is a friendly event in which he is the only character. Abidor Crank will turn all rotten food in the inventory into stews automatically when the player talks to him. He also boosts their Defence level by 15% and life points by 20% regardless of what level they are at and fully heals the Trekking companion. These boosts will slowly fade back to normal after a number of minutes dependent on skill levels.

Additionally, if a player manages to enter Morytania without either completing Priest in Peril or killing the ghoul beneath Paterdomus, he may appear and teleport them out, claiming they'll never survive in Morytania. There is a chance that a vampyre will appear and knock out the player instead.

Abidor Crank healing the player and the partner.