From the RuneScape Wiki, the wiki for all things RuneScape
Jump to navigation Jump to search
This article is about the Temple Trekking companion. For the pyrelord, see Pazuzu (pyrelord).
Loading...
Level 1-74Level 75 -99

Pazuzu is one of the three characters players may escort to Burgh de Rott in the Burgh de Rott Ramble minigame, and is the replacement of the mage. She is the "easy" option for the minigame, and thus has the easiest time levelling up. At higher levels she will assist you by doing things like chopping logs to fix the broken bridge.

The most effective way to level Pazuzu (as well as Zachory Bragg) is by letting her kill Ghasts. This can be done during a normal Ghast event, or during the event where adventurers have to be fed in order to not turn into a Ghast (so do not feed them). 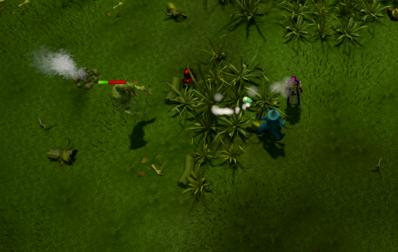