The Golem is a quest centred around the remains of the city of Uzer in the Kharidian Desert. Long ago, the city, which was defended by an army of clay golems, was destroyed at the hands of the demon Thammaron, leaving only ruins and a single clay golem remaining. You must utilise this golem to find the truth behind the city's destruction.

Deep in the desert sand, the ruins of the once great city of Uzer, a lone survivor - an ancient clay golem - forever paces back and forth. It is badly damaged, and its mind cannot rest until it has completed the task for which it was created.

It is up to you to uncover the secret of the lost city, and add the final chapter to a story begun in the violence of the Third Age. 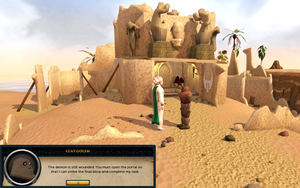 The golem informs you of its task.
Items needed: Four pieces of soft clay

Travel to the desert through Shantay Pass. Head east from Shantay Pass, crossing the bridge, past the Dominion Tower and walking east until you reach the Ruins of Uzer. In one of the still intact houses, you will see a broken clay golem.

Before talking to the golem, pick up the letter near it, marked by a red dot on the minimap. Speak to the golem and he informs you that he needs considerable repairs.

Use the 4 pieces of soft clay on the golem to bring him back to coherence.

The golem tells you that it was programmed to destroy a powerful demon. To help the golem, you must discover how to open the portal leading to the demon's lair.

Enter the temple ruins behind the golem, and climb down the stairs. Pick up the strange implement in the north-west corner of the temple. You'll also need a black mushroom; they're scattered everywhere, but do not show up on the minimap. With an empty vial in your inventory, grind a black mushroom to make some black mushroom ink. 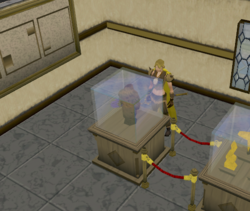 The display case that the statuette resides in.

Read the letter you previously picked up and go to the Varrock Dig Site, located east of the city of Varrock (you can use the archaeology journal for a quicker teleport). In the north-eastern area of the dig site, you will find Elissa. Speak to her about the letter you found, and she'll tell you that she wrote it to her late husband, Varmen. She informs you that his notes are in the exam centre.

Head south to the exam centre and search the southern bookshelf to find Varmen's notes. Reading them reveals that the demon the golem must defeat is Thammaron, and that golems experience "extreme discomfort" until they've completed their task. Once you have read the notes, head back to Elissa and select the "Uzer" option. After speaking to her, you need to visit the Varrock Museum.

Talk to Curator Haig Halen at the museum and ask him about a statuette recovered from the city of Uzer; he flatly refuses to give it to you. Pickpocket him instead to receive a display cabinet key.

Go upstairs and locate display case 30 – the last case in the first line from the stairs. Unlock the display case and steal the statuette. 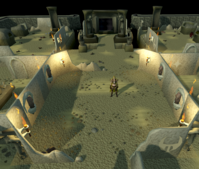 The four statuettes, facing the door.

Head back to the desert from Shantay Pass, and start walking to the bridge near the Dominion Tower. Before you cross the bridge, take the path north along the river and grab a phoenix feather from the desert phoenix; it may take you a few tries, depending on your Thieving level.

Wearing a grace of the elves necklace while having the porter function enabled, or any type of Sign of the porter, will send the feather to your bank.

At Uzer, go down the stairs to the temple ruins. Situated in the centre of the temple are four alcoves on the walls. Use your statuette on the empty alcove and turn all the statuettes to face the double doors at the north end of the dungeon – the two on the west side should be facing north-east, and the two on the east facing north-west. Go through the double doors to enter Thammaron's throne room, and you will immediately see Thammaron's inanimate skeleton to the east. You may also run to the end of the corridor to take the jewels from the throne. This will unlock the Looting the Demon Throne achievement which is a requirement for the Master quest cape. 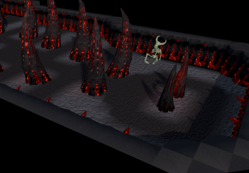 The demon is dead!

Go back through the portal, up the stairs, and inform the clay golem about the deceased demon. Despite being told that the demon is dead, it will continue to assert that its mission is incomplete, as it did not defeat the demon itself.

Dip the phoenix feather in the black mushroom ink you made earlier to make a phoenix quill pen. Use this pen on some papyrus to write a golem program – "YOUR TASK IS DONE". 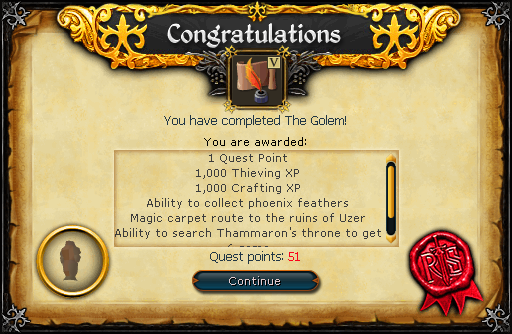 The Golem is directly required for the following quests/miniquests:

This information has been compiled as part of the update history project. Some updates may not be included - see here for how to help out!
Retrieved from ‘https://runescape.wiki/w/The_Golem?oldid=35970865’
Categories:
Hidden categories: