From the RuneScape Wiki, the wiki for all things RuneScape
Jump to: navigation, search
For other uses, see Anima-golem (disambiguation). 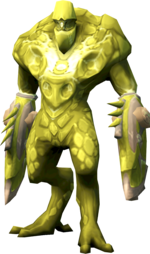 Anima-golems are monsters that appear during the third phase of the fight with Telos, the Warden. They appear one at a time (a maximum of 3 will appear), giving small sets of anima to power up Telos. When they are defeated, they drop onto the ground and a bar will appear over them. When this bar fills, they will rise back up and begin charging Telos again.

The anima-golem's combat level and life points increase along with Telos's rage. However, this is rather insignificant, due to their low base health and the fact that they do not retaliate back if attacked.