From the RuneScape Wiki, the wiki for all things RuneScape
Jump to: navigation, search
Daystone? (edit)

The daystone is an item that can be unlocked from 3,000 Seren reputation in the Heart of Gielinor. It can be interacted with to temporarily brighten the area and background, giving a lighting effect similar to that in an overworld city. The effect lasts until logout.

Together with the other Heart of Gielinor toys it is part of the Mod Deg trading sequence by using one of them, while having the rest of them in the inventory, on the underwater disguise kit to make the broken disguise kit. 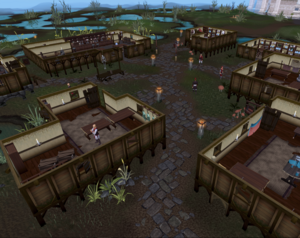 The update history project is a work-in-progress – not all updates to this topic may be covered below. See here for how to help out!
Retrieved from ‘https://runescape.wiki/w/Daystone?oldid=31585539’
Categories:
Hidden categories: