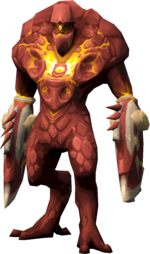 The Volcanic anima-golem is a monster that appears during the fourth and fifth phases of the fight with Telos, the Warden. Like Telos himself, the volcanic anima-golem's combat level and life points increase with a higher enrage percentage.

The update history project is a work-in-progress – not all updates to this topic may be covered below. See here for how to help out!
Retrieved from ‘https://runescape.wiki/w/Volcanic_anima-golem?oldid=32516837’
Categories:
Hidden categories: