From the RuneScape Wiki, the wiki for all things RuneScape
Jump to: navigation, search
For the enemy encountered during Nomad's Elegy, see Bandosian golem (Nomad's Elegy). 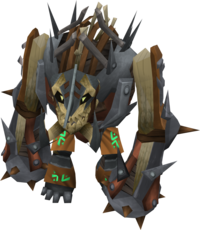 The Bandosian golems were used to both defend Bandos's convoys and to attack Armadyl's caravans during the world event, the Bird and the Beast.

There were four golem parts: the head, body, arms, and legs. Body parts could be voted on to assemble a golem with varying traits. Every part of a golem could be constructed aggressively or defensively toward caravans or attack enemy sites. Alternatively they could be equipped with a special trait that can give the following bonuses:

The golems seemed to have had a 90% resistance against damage dealt by players.

All players who attacked the golem and dealt damage to it before it died received 5,900 renown and a high chance of sacred metal fragments, making it worthwhile to attack the golem in large numbers.

This information has been compiled as part of the update history project. Some updates may not be included - see here for how to help out!
Retrieved from ‘https://runescape.wiki/w/Bandosian_golem?oldid=35378681’
Categories:
Hidden categories: