From the RuneScape Wiki, the wiki for all things RuneScape
Jump to: navigation, search
For the pet version, see Micah. 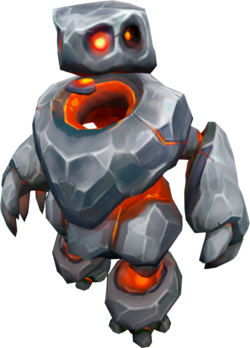 A magma golem is an enemy encountered in the Dragonkin Laboratory. They are much like their moss counterparts in that they have halberd-based melee attacks. However, they are incapable of having minions to assist them, nor do they hit as hard as them.