From the RuneScape Wiki, the wiki for all things RuneScape
Jump to: navigation, search
This article is about Treasure Hunter item. For the item dropped by Nihil, see Vampyre fangs.
Feral vampyre fangs? (edit)

In addition they can be used to unlock the vampyre hunter amulet and its abilities and to charge the amulet.

Feral vampyre fangs can be obtained in various ways. 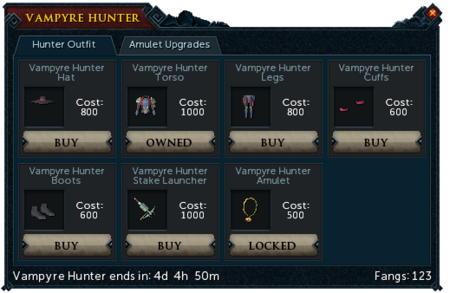 The update history project is a work-in-progress – not all updates to this topic may be covered below. See here for how to help out!
Retrieved from ‘https://runescape.wiki/w/Feral_vampyre_fangs?oldid=32865439’
Categories:
Hidden categories: