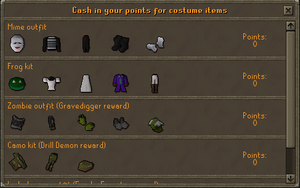 Costume selection for exchanging points for a costume.

Costume points were possible rewards from Random event gifts, prior to the removal of the Random Event System. When players had saved up enough costume points, they could claim items from one of five random event costumes.

As of 25 February 2009, with the Random Event Update and More update, players can no longer exchange their frog tokens. This was because all the frog tokens changed into Random event gifts after the update. Players are required to go to Varrock and speak to an old lady in Thessalia's Fine Clothes store, named Iffie, who sits against the northern wall of the store in her rocking chair. There players may cash in their Costume points, and exchange them for a costume.

It is important to note that after choosing the "Save up for an outfit!" option from the random event gift menu, one point will be added to the respective random event's costume points. When trading the points for clothes, one point equals to one piece of the outfit (mask, legs, torso, etc.). The maximum number of points a player can save up for each set is equal to the number of pieces in that set. However, it is possible to get multiples of a single part if you have the full set - it is unknown if this is a glitch.