From the RuneScape Wiki, the wiki for all things RuneScape
Jump to navigation Jump to search
The Old School RuneScape Wiki also has an article on: osrsw:Tokkul
This article is about the currency. For the ring, see TokKul-Zo.
Item JSON: {"edible":"no","members":"yes","stackable":"yes","stacksinbank":"yes","death":"reclaimable","name":"Tokkul","bankable":"yes","gemw":false,"equipable":"no","disassembly":"no","release_date":"19 September 2005","id":"6529","release_update_post":"Massive minigame - Fight Pits","lendable":"no","destroy":"Drop","highalch":1,"weight":0,"tradeable":"no","examine":"It's a token of some kind made from obsidian.","noteable":"no"}

Tokkul is the currency of the TzHaar. It is made from hardened bodies of dead TzHaar. According to the Wise Old Man in Postbag from the Hedge 12 and 14, the name Tokkul means, roughly, rock token or material value.

It is revealed in The Elder Kiln quest that the souls of the dead TzHaar live in a tormented state within the Tokkul, although this is generally disbelieved by living TzHaar. During The Brink of Extinction, this is finally accepted as fact by the leaders who begin returning the Tokkul to the sacred lava, releasing the spirits inside.

After the Brink of Extinction, the TzHaar continue to deal in tokkul; the merchants simply collect the tokkul so that it may be sent to the lava, while the JalYt are given it as the TzHaar don't have any other valuable currencies to offer them in its place.

Since Tokkul isn’t tradeable, it must be gathered by the player themselves through the ways below:

The TzHaar Fight Pit minigame, along with selling to the TzHaar shops, was the first way to get Tokkul. Tokkul is only received from the Fight Pit if you are its champion. The amount of Tokkul you receive as a reward is based on the combat levels of all of the participants in that round.

The Fight Cave is the ultimate gauntlet for players proving themselves worthy of a Fire cape. Players obtain variable amounts of Tokkul as a consolation prize depending on how far they progress before succumbing. Each time a player completes the Fight Cave, they will receive 16,064 Tokkul along with a Fire cape.

The arena, part of TzKal-Zuk's fight, is a gauntlet in which players face numerous TzekHaar before they can fight Zuk. While Zuk himself does not drop any tokkul, all of the TzekHaar before him do. Players can get around 25,000-27,000 tokkul per run from the guaranteed drops. While less tokkul is given compared from killing TzHaar, it made up for with other drops.

After completion of The Elder Kiln, the player may spend Tokkul to have their TokKul-Zo recharged. The price is 50,000 Tokkul for a complete recharge (4,000 charges).

Once the player has access to the Fight Cauldron, they may donate Tokkul at the coffer to temporarily enhance their obsidian armour. 15,000 Tokkul may be spent for an extra 10% damage reduction, and to lower its degrade chance per hit to 20%, for 20 minutes. You can donate three times simultaneously to extend the duration to 60 minutes. 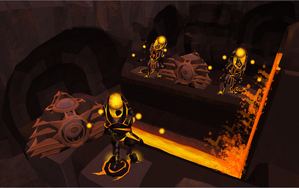 TzHaar-Mej spread TokKul into the sacred lava after The Brink of Extinction
Retrieved from ‘https://runescape.wiki/w/Tokkul?oldid=35798824’
Categories:
Hidden category: