From the RuneScape Wiki, the wiki for all things RuneScape
Jump to navigation Jump to search
Item JSON: {"edible":"no","id":"27365","stackable":"yes","removal_date":"14 March 2013","death":"always","name":"Valentine heart","bankable":"yes","gemw":false,"equipable":"no","members":"no","disassembly":"n/a","restriction":"removed","release_date":"14 February 2013","release_update_post":"Squeal of Fortune: Valentine Yelps","lendable":"no","destroy":"Are you sure you want to destroy all held Valentine hearts? You cannot reclaim them; you can only find more.","stacksinbank":"yes","removal_update_post":"Squeal of Fortune: Feast for Guthix","highalch":false,"weight":0,"lowalch":false,"tradeable":"yes","examine":"Collect these to claim various gifts of loving and loathing.","noteable":"no"}

A Valentine heart was a seasonal item that could be won on the Squeal of Fortune, obtained through skilling, received as a drop from a monster, or traded with other players. Upon obtaining Valentine hearts from skilling or a monster drop, players received the following message in their chat box: Congratulations! You've found some Valentine hearts! They were only available from 14 February 2013 to 25 February 2013. Players could "send" their Valentine hearts to open up a heart-shaped interface, where they could spend their hearts as currency for Valentine-themed rewards. They were removed from the game on 14 March 2013. 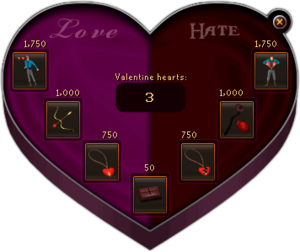 A player attempts to send their Valentine hearts.

The rewards unlocked with Valentine hearts were split into Love and Hate rewards:

Chocolates, a neutral reward, could be received by trading in 50 hearts.

There are six different chocolates, all of which could be won on the Squeal of Fortune or bought with Valentine hearts. Each of these six chocolates heals 200 life points and gives a temporary +1 to +3 boost to a specific skill, as listed here:

The total cost of the Love or Hate rewards was 3,500 for all emotes and 7,000 for all rewards excluding chocolate.

Feeding it to a pet Baby Troll would give the option to either name it "Valentine Heart", or a random pet name among the following:

Players could click "Randomise pet name" to get another name until they either got the desired name, or it looped back to "Darling".