From the RuneScape Wiki, the wiki for all things RuneScape
Jump to: navigation, search
Item JSON: {"edible":"no","id":"38135","stackable":"yes","removal_date":"31 October 2016","death":"alwaysinclwild","name":"Solar flare","bankable":"yes","gemw":false,"equipable":"no","members":"no","disassembly":"no","restriction":"removed","release_date":"29 September 2016","release_update_post":"Treasure Hunter - Sunfury Armour","lendable":"no","destroy":"Are you sure you want to destroy your Treasure Hunter prize? You cannot reclaim it.","stacksinbank":"yes","removal_update_post":"None","highalch":false,"weight":0,"lowalch":false,"tradeable":"no","examine":"Combine these together to form the Sunfury armour, including a cape and shield.","noteable":"no"}

Solar flares were a promotional Treasure Hunter prize that could be combined into pieces of Sunfury Armour (Tier 1) and gems of aspiration. Any remaining solar flares were automatically converted into 10 coins each after logging in after the beginning of 31 October 2016.

Solar flares were available as rewards from 29 September to 3 October 2016, and could also be obtained while training Divination. 54,000 solar flares were needed to make a full set of Sunfury Armour (Tier 1). 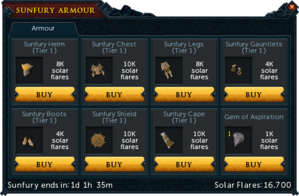